Democratizing Leadership in the Age of Change

Leadership should be something everyone practices, not just formal leaders. 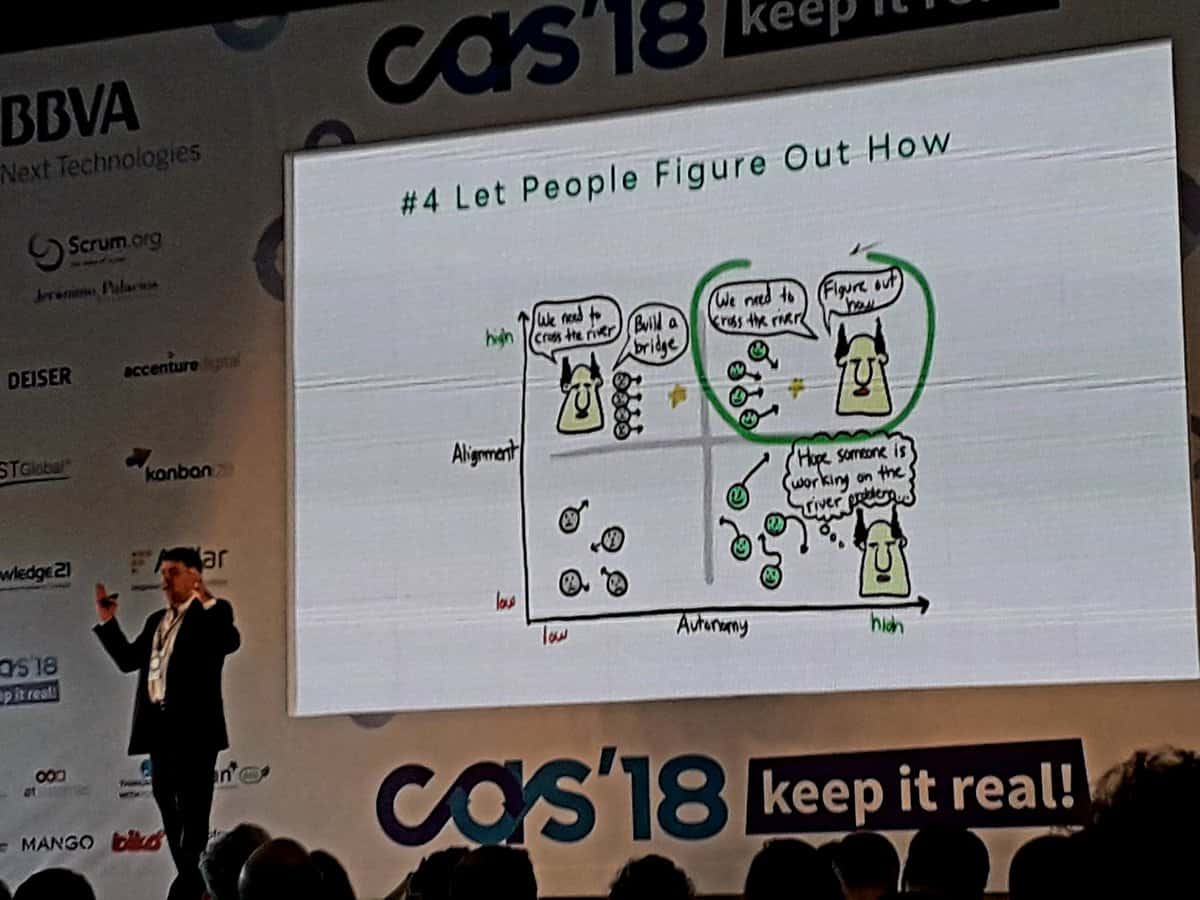 Keynote at 2018 Agile Conference in Spain

Last week, I had the honor of speaking at the annual Agile Conference in Spain. My keynote was 45 minute-long — the following are some insights and thoughts, not the entire speech 🙂

Thought I’d sit down on stage to kick off my keynote — it felt awkward to start from a position of power. It helped level the playing field and created a genuine connection with the audience.

The Case for Democratizing Leadership

Democratizing leadership is neither a Pollyanna approach nor managing by consensus. Not everyone is meant to lead an entire organization, but they can

To succeed in a fast-changing and unpredictable world, everyone must become an agent of change.

Culture has become something cool — it matters more than salary. Companies are creating PR stunts to attract the best talent. Unfortunately, there’s a gap between what companies believe their culture is and what people experience.

Improving engagement has nothing to do with perks — a ping-pong table or free beer won’t offset a toxic culture or being micromanaged. People want more autonomy. They don’t just want air to breathe, but to feel they have the authority to choose and make decisions.

Micromanagement is still pervasive — research shows that 79 percent of people have been victims of it. However, what’s currently driving control is the need for survival. The more we talk about distributing authority, getting rid of structure or titles, the more fear we create among senior managers.

Most ‘bosses’ feel afraid of losing not just control, but their reputation and authority. People’s demand for more autonomy creates an existential crisis: senior executives are so scared their expertise and perspectives won’t be needed any longer.

Shifting from a hierarchical model to a complete decentralized one is not always the right answer — we need a balanced approach.

Micromanagement is not scalable

Every employee is a sensor — front-line employees are exposed to most of the organization’s opportunities. According to the Iceberg or Ignorance, senior executives only see 4% of those. However, the notion that employees know better is just one side of the story. Improving communication across all levels is essential.

Most importantly, delegating authority is not enough — we must prepare employees to lead. That people see more things, doesn’t mean they are acting upon them.

The opposite of control is not total independence. Successful organisms and organizations are interdependent.

People’s motivation is intrinsic — a carrot-and-stick approach doesn’t work. Most companies ‘bribe’ their employees creating a vicious cycle that only drives a reactive effect that lasts as long as the ‘punishment or rewards stays.

Motivation 3.0, as per research by Daniel Pink, is based on three elements: Autonomy, Mastery, and Purpose.

Power Is an Illusion

We can’t talk about leadership without addressing power. Unfortunately, this is a topic that very few organizations discuss with their teams. Understanding what power is, the role it plays, and how it’s used across the company is vital to promote autonomy.

Power resides where we believe it resides as this video illustrates.

We usually associate power to formal authority. But, sometimes the money matters the most. Or that who manages politics or alliances has more strengths. Other times, the one who owns the ideology is more powerful than those with the right title.

Power is an illusion — it shouldn’t stop us from doing what’s right.

The definition of power is to be able. We have power when we act.

Everyone has the ability and responsibility to lead.

Leadership is a behavior. If you see something — either an opportunity or a problem — do something about it. People become change agents by developing new solutions or new ways of working.

Leading is a verb, not a role. We must prepare everyone to lead. Birds take turns leading the flock to give the younger ones the opportunity to lead. They must be prepared in case something happens to the formal leader.

Organizations, on the contrary, wait for people to have the ‘right’ position before preparing them to lead.

Leading is a fluid behavior; it shouldn’t be tied to a title or seniority.

Everyone in the organization must lead. That doesn’t mean that everyone will run the company, but they must be provided with autonomy and authority to make decisions. The closer someone is from a problem or opportunity, the more they understand and care about it. They can also act faster.

The other aspect that we must let go of, to distribute leadership more evenly, is the idealization of leaders. We have turned leaders into superheroes — books and articles portray a picture-perfect that feels unattainable.

Every leader (and culture) has both superpowers and Kryptonite.

There’s a huge gap between the image Facebook’s Sheryl Sandberg projected and her reality of being tainted by crisis after crisis. Similarly, Steve Jobs was a smart businessman, but he was far from being perfect.

Demystifying leaders is critical to invite more people to become agents of change.

Liberating the Ability to Lead

Democratizing leadership requires working on three aspects: the culture, the role of leadership, and the mindset.

“The only true wisdom is in knowing you know nothing.” — Socrates

Wise leadership is about knowing when to lead from the front and when to step back. To make decisions that are both ethically sound and pragmatic. To be courageous under fire — to know when to hold and when to fold.

Being wise is leading with questions, not perfect answers. To promote curiosity and encourage others to find the solutions — to trust the power of diverse thinking instead of relying on one’s perspective.

To create a safe space where people can challenge existing assumptions.

“Don’t be fooled by thinking that if performance is great it’s because of you, not despite you.” — Kannan Ramaswamy

Treating leaders as superheroes promotes the wrong mindset — most senior executives were trained to save the day.

People need their bosses to help them, not to rescue them. Being helpful is not about babysitting people, but creating the right conditions so they can thrive.

Remove unnecessary obstacles and time-wasters. How many meetings, tasks, or irrelevant projects are preventing your team from doing meaningful work?

Create alignment and provide autonomy — let people figure it out how.

Encourage people to break the rules with a purpose.

3. A Culture of Abundance:

A Culture of Scarcity needs to leave room for one of Abundance, as I wrote here. Rather than fighting for limited resources, teams should focus on identifying new sources of innovation and growth.

A Culture of Abundance encourages collaboration to stay ahead of the game, instead of internal competition to protect status and hierarchies.

It’s built on the foundation of Psychological Safety and Transparency — a space where people feel free to experiment, make mistakes, and openly address their tensions.

A Culture of Abundance is run by rules that enable, not limit people. It encourages people to identify and create opportunities through generosity and collaboration rather than control and power struggles.

Abundance requires a ‘build and unite’ approach, rather than a ‘divide and conquer’ one.

Driving organizational change is a collective effort — everyone has the responsibility to act and make things happen.

Stand up for what you believe. Don’t just speak up — if you see something, do something. Be authentic. Be honest. Be brave.

Take risks. And own your mistakes. You don’t need to be the smartest guy in the room — lead with questions, not perfect answers. It’s okay to say, “I don’t know.” It takes courage to be vulnerable.

Challenge conventions. Challenge yourself. You don’t need to wait for instructions. Or a title. Power is an illusion. Give yourself permission to lead.