Leaders Must Stop Being Superheroes

We don't need another superhero. It's time for vulnerable leaders to take over. 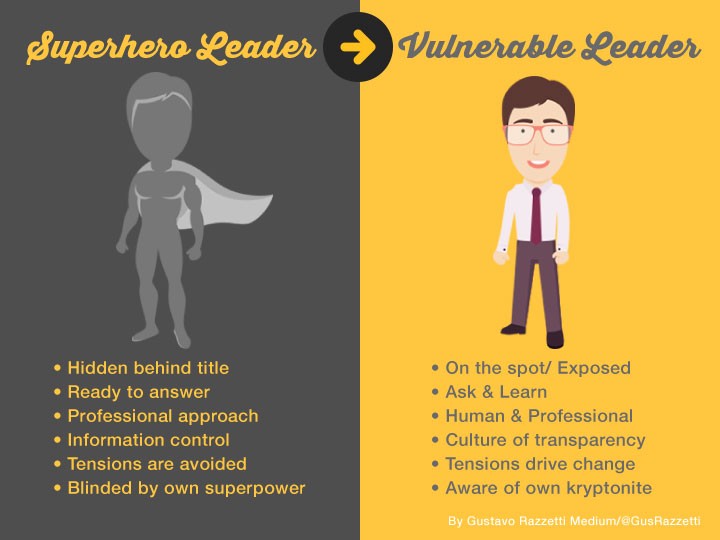 Vulnerability Is the Superpower of Effective Leaders

“To be human is to discover we can be vulnerable and still be strong." – Lolly Daskal

The office seemed strangely quiet as I walked around the almost empty space. My mind was worried: one of my top executives had just resigned. I was only a few months into this job that seemed very promising. I soon realized that his departure could easily turn into a mutiny. The entire team was gathered in a bar. The executive was encouraging everyone to jump off the ship before it sunk.

Those of us who make a career transforming organizations are used to facing resistance. But this time it felt more personal. I was never told before that I was clueless about how to run a company. Everyone was considering quitting. I felt vulnerable, like I was about to fail. I, too, wanted to quit.

We Are Not Trained to Be Vulnerable

If you are wondering what happened, I didn’t quit. It took me a lot of courage not to do so. And lots of reflection. The organization ended being very successful but that’s not the point. What matters is that this experience taught me about being vulnerable.

As professionals, we have been wired to have authority over people. We have been trained not to ask for help. As leaders, we need to appear as if we are in charge, like nothing can affect us.

With the example I described earlier, trying to change things too fast backfired. Maybe the organization wasn’t ready yet. Or maybe my style wasn’t the right one. Either way, if I wanted to change something, it was me who had to change first. I had to embrace my vulnerability and use it to experiment with a different approach.

When you are the spot and your ability to lead an organization is being scrutinized by everyone, you cannot continue behaving as if everything is OK. Even if they don’t say it, people expect you to be the one who voices everyone’s concerns and make them explicit.

It took an all-company event to create a fresh start. It wasn’t easy to address the team and acknowledge the fact that most of them might neither like me nor my strategy. But it felt the right thing to do. I told them that I could deal with that. That in order to move the company forward, my willingness was not enough. In spite of the resistance, I still had a strong conviction about where to take the organization but didn’t have all the answers on how to get there. I needed their help. The company needed everyone’s ideas. Turning things around was not a one man’s job.

Open communication is always an effective first step. It shows the willingness to expose oneself by sharing our emotions and true intentions. Conviction and courage, despite showing vulnerability, are what inspires people. In my case, it opened the doors to those who wanted to offer help and play an active role in what was possible. It also accelerated the exit of naysayers.

Vulnerability Means That You Trust (Yourself)

“Vulnerability doesn’t mean to be weak

but accepting that you have weaknesses”

Since elementary school, we are conditioned to hide our feelings so we don’t appear weak. The paradox is that being perceived as strong has a downside: people will try to find fractures in our words or behavior. People want to see the human side of leaders.

As research by Paula Niendenthal shows, while we may try to look perfect or in charge, we might also be perceived as unauthentic. Which takes me to the most critical aspect of leadership: trust.

Trust is the foundation to any relationship. Like a building, lack of strong base will make it collapse. Vulnerability doesn’t mean being weak but that you accept and acknowledge your weaknesses. It’s a courageous path to be yourself.

Vulnerability means that you trust yourself. Exploring your flaws is another good way to create connection and trust.

We Don’t Need Another Hero

The downside of success is when leaders start drinking their own Kool-Aid. Suddenly, they turn into self-proclaimed superheroes: they get blinded by their superpower and are no longer aware of the Kryptonite.

In an era where rigid obsolete structures are being questioned, a new kind of leadership is required. Organizations are looking to become more flexible and adaptive to survive in an uncertain world. Shouldn’t their leaders stretch their mindsets too?

This shift is what I call moving from a “Superhero” to a “Vulnerable” leader mindset. A leadership that generates the trust needed to experiment. Developing a culture where people don’t need to worry about the consequences if their experiment goes wrong.

A vulnerable leader doesn’t hide behind a title. He is comfortable being in the spotlight, exposed to feedback or being questioned. She is curious and is always learning, that’s why she asks questions rather than trying to prove her knowledge. His approach creates a safe space where there’s no need to hold back emotions at the risk of not “being professional”. Rather than control information flow and avoid tensions, the vulnerable leader promotes a culture of transparency. She is very sensitive to tensions and stands behind people to bring those up. Addressing tensions not only helps unblock the work but also drives change.

The vulnerable leader doesn’t have a problem discussing his flaws. That others are aware of his kryptonite makes him more human. That doesn’t mean that he doesn’t benefit from his superpowers, he just doesn’t pretend to be invincible.

Organizations don’t need another hero. People prefer to be inspired by human beings rather than follow perfect superheroes.

Practicing Vulnerability One Step at A time

“The hardest thing about being a leader is demonstrating or showing vulnerability… When the leader demonstrates vulnerability and sensibility and brings people together, the team wins.” — Howard Shultz, Starbucks CEO

One word of caution: being a Vulnerable Leader does not necessarily mean being soft. It’s about being more human and real. Adaptive leadership is very important, as Jon Maner explains on his Harvard Business review piece. Some situations might call for a more directional approach to drive quick alignment. Others might benefit more from an empowered leadership style. What I don’t agree with the author is that, even when a stronger approach is required, leaders don’t need to go to the extreme to be feared.

Mahatma Gandhi is a perfect example of how you can be vulnerable and a strong leader. He cared about people, was human and humble, and a very successful. He brought together a quarter of the world’s population to fight the British Empire without using violence. He was able to persuade Muslims and Hindus to put aside their differences in order to achieve independence.

The path towards vulnerability takes time. And I’m far from reaching that destination. These are simply thought starters. Start your path by walking.

Write frequently: sharing your thoughts and ideas builds a habit of being exposed. Getting on the spot of public scrutiny not only reinforces vulnerability but also has the upside of making your ideas stronger.

Encourage emotional check-ins: At my current organization, we start our meetings by asking each other “what has your attention?”. The more authentic the answers are, the more we express how we feel, the better space we create for open conversation. We need to provide space for people to bring their souls to work.

Share stories that expose your human side: I started adding more personal stories to my presentations and Medium pieces, like this one when I received a “not-so-cool” anonymous feedback. Your personal stories help people connect to theirs.

Promote a culture of transparency: As I wrote in a previous piece, it’s harder for people to question your intentions when you take transparency to the extreme. Vulnerability sets the tone of how the organization communicates.

Ask for on-going feedback: My favorite question is “What can I do better?” Go and ask for unsolicited feedback, it makes you more human and you can learn a lot. It will also inspire others to do the same.

Apologize often: acknowledging your mistakes or admitting that you made a wrong call not only sends a message that you don’t hide behind the “power” but also promotes a safe place. People will feel confident not only to express their own mistakes but to take more risks too.