How Pixar Designed a Culture of Collective Creativity 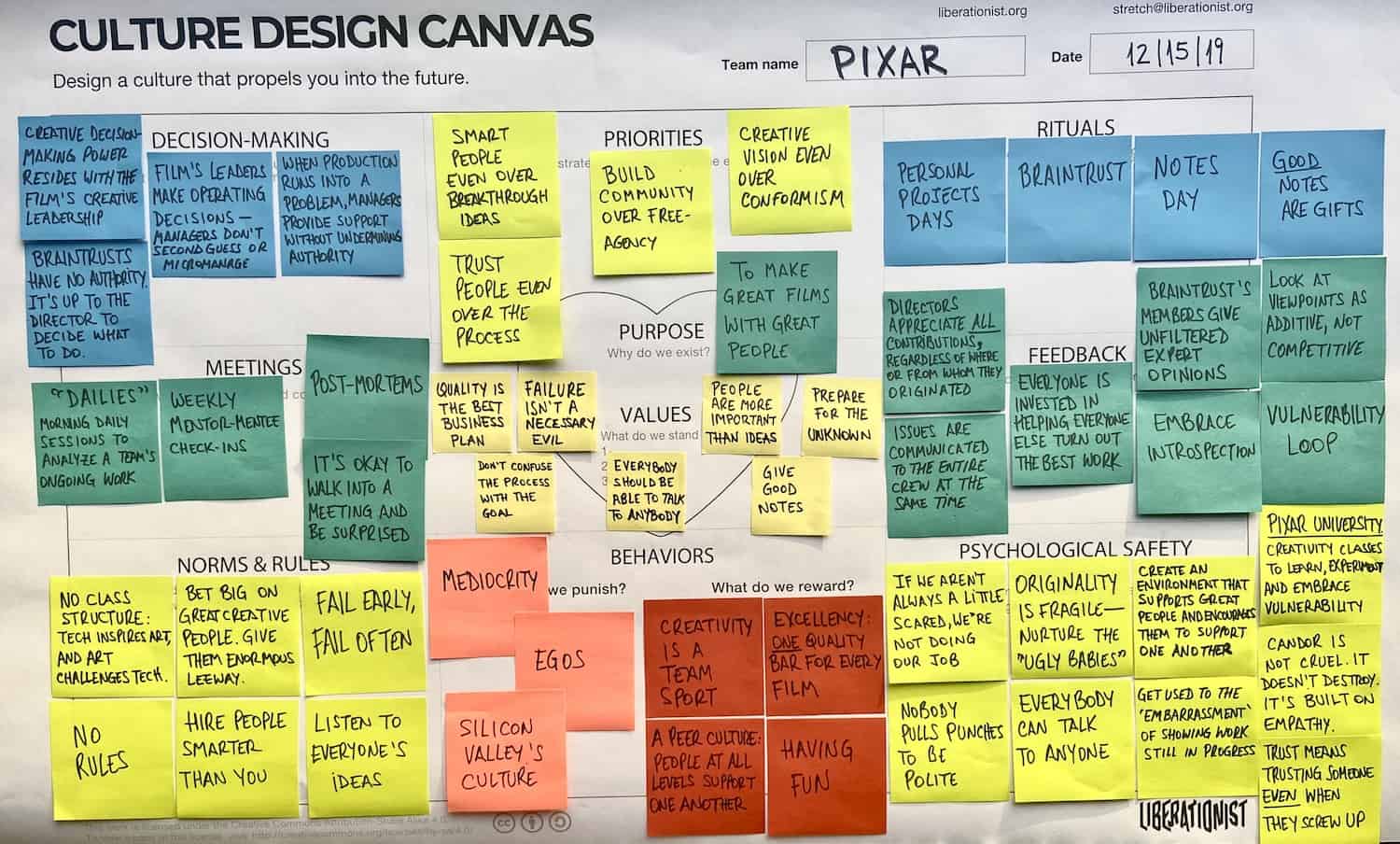 Pixar’s thriving, creative culture is the result of a systematic approach to churning out lots of ideas over brilliant breakthrough ideas.

Above all, Pixar trusts smart people over processes and ideas. Everybody can talk to anyone. All ideas are welcomed, regardless of where or from whom they originated. Trust means trusting someone even if they screw up. Directors are given unfiltered, candid feedback, but they maintain control of their films.

The Core of Pixar’s Culture: Values and Purpose

Unlike most companies, Pixar doesn’t have a clear mission statement or values. The film company believes that “quality is the best business plan .” However, the company clearly articulates what it wants to achieve in the form of principles.

Pixar’s goal is: “To make great films with great people.”

“The best way to predict the future is to invent it.”–Ed Catmull

Smart people even over breakthrough ideas

Trust people even over the process

Creative vision even over conformism

In most creative cultures, egos and individualism get in the way. Ed Catmull and his team have put a lot of energy and dedication into building a collective creative culture.

Pixar rewards: creativity as a team sport, having fun, excellency (having the same quality bar across all films), and a peer culture (everyone supporting each other across different levels).

The above quote captures an obsessive dedication to building a safe culture where people can be candid, experiment, and take risks.  Pixar has been building psychological safety by making people comfortable with being uncomfortable as well as supportive peer-to-peer feedback.

Originality is fragile; it requires to see the potential and nurture the “ugly babies.” They are the first iterations of originality, which need encouragement and care before they can grow into beautiful creatures.

As Catmull says, “No Pixar movie ever started out as funny, heartfelt, and well-written as what we see in theaters. In fact, many of them were complete disasters at the start.”

At Pixar, people are expected to get used to the ’embarrassment’ of showing their work in progress. One’s colleagues are not there to judge the work, but to help it grow.

Pixar practices radical candor building on empathy; honesty is not meant to harm others or destroy an idea but to nurture them. Conversely, people don’t pull punches to be polite.

The overall environment supports people and encourages everybody to support each other. Trusting someone is about trusting them even when they screw up.

Pixar University has become a vital component to make it safe for people to experiment. The belief is that if people aren’t scared, they are not doing their job. At Pixar University, employees learn anything from improv and drawing to screenwriting.

Pixar has a strong feedback culture. Directors appreciate all ideas, regardless of from whom they originated. Divergent perspectives are considered as additive, not competitive.

Issues are shared and addressed to the entire crew at the same time, not cascaded from one level to another. The film company leverages the “vulnerability loop” that happens when two people are vulnerable together.

Pixar uses Braintrust meetings to root out mediocrity and to push toward creative excellence. The Braintrust meets every few months to assess a film that’s under development.

According to Catmull, it’s essentially the same as any creative get-together; the only difference is that people give candid feedback in the form of notes. It’s like a version of a peer review, a forum to raise Pixar’s game.

The members of a Braintrust don’t have any hidden agenda. They are not there to steal the movie from the project owners. That’s one essential rule of this method; Braintrusts are formed of a group of peers that are working on another film.

Participants should provide clear notes at the end of the meeting. Good notes should be timely, not too late to fix the problem.

According to Catmull, good Braintrusts’ notes are specific and capture:

What makes no sense?

At the Tools department, Guido Quaroni instituted “personal project days.” His engineers had two days a month to work on anything they wanted – it didn’t have to be directly related to any particular film.

On Notes Days, Pixar shuts down all work for a day to facilitate a kind of collective coming-together of all employees. People break apart into groups to share their thoughts on various topics to solve a problem. Managers are excluded from Notes Day so that employees can feel freer to offer candid feedback.

To help staff and ideas grow, Pixar runs on a steady diet of daily review meetings, 1:1s, and postmortems when projects are completed.

Pixar avoids unnecessary meetings with the mindset that it’s okay (for a senior manager) to walk into a meeting and be surprised. This means getting rid of review meetings with different levels.

“Dailies” are morning sessions to review each team’s work in progress. It’s part of the collective mindset where everyone on the team knows what’s going on.

“Post-mortems” is a discussion about learning from past mistakes or successes. The team gets together to review a complete projet and must address “5 things they will continue to do” and “5 things that they wouldn’t do again.”

The most important rule at Pixar is that the company doesn’t like rules. However, there are various norms that guide the way the team works and collaborates.

Pixar trusts talented people. The company hires – and bets big – on great, creative people and then gives them enormous leeway.

Catmull identified the initial division between certain areas. He purposefully worked on getting rid of the class structure: technology inspires art and art challenges tech. They both have to work together.

At Pixar, film leaders make all operating decisions; their bosses don’t have to second guess or micromanage them. Managers only get involved when production is running into a problem. They intervene to provide support without undermining the director’s authority.

The creative decision-making authority lies solely on the film’s creative leadership. The Braintrust provides input and feedback, but has no authority–it’s up to the director to decide what to do with that input.

Overall, Pixar has a creative culture that is a safe, open, and high-candor environment. The secret of Pixar lies in building continuous introspection. As Catmull said, “If we are successful, we will be equally blind.”

To map Pixar’s culture, I used the following resources, among many others: 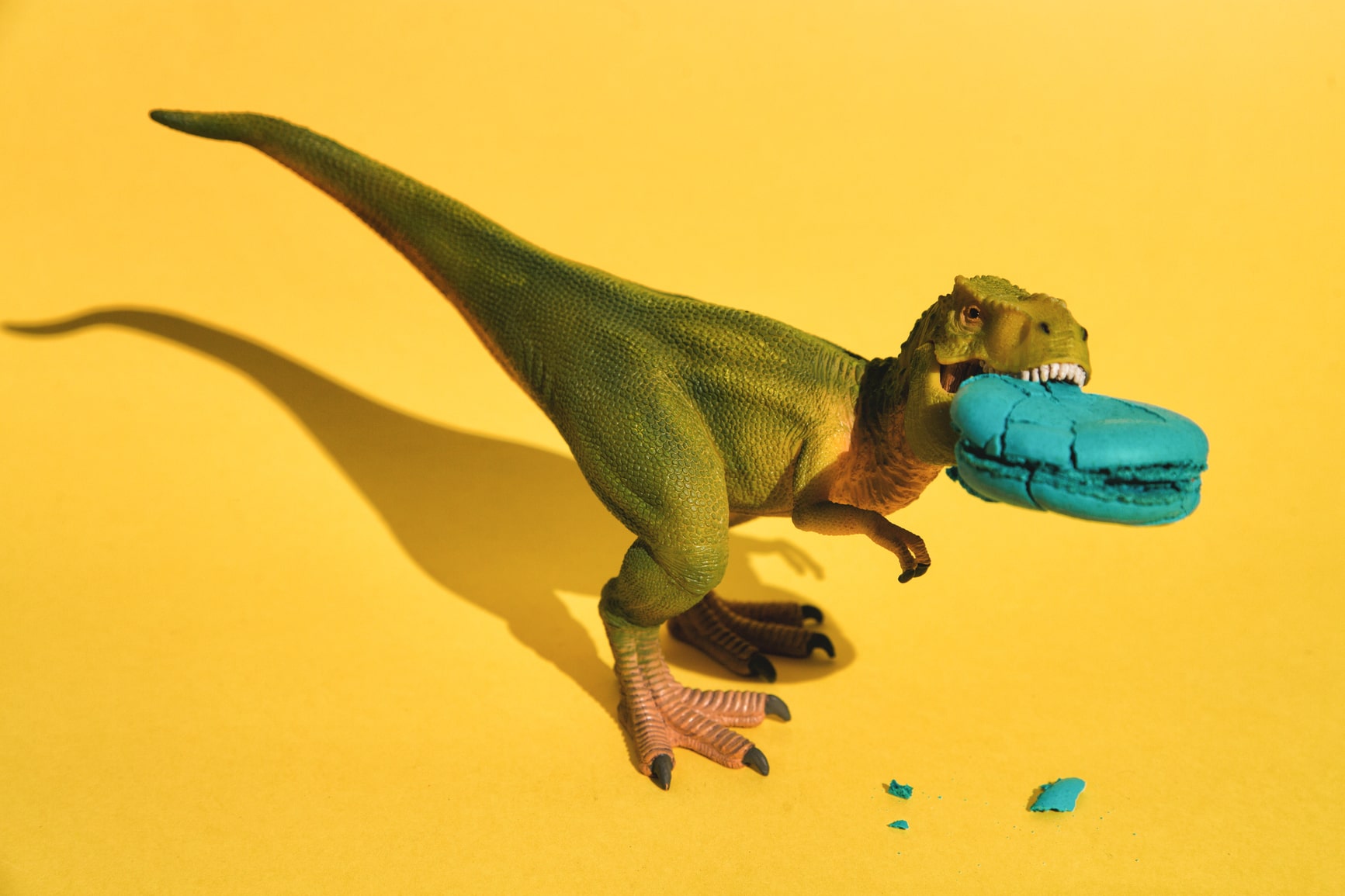