Why Purpose Matters (Especially in Times of Crises)

A purpose matters because it reminds teams of what’s expected of them. In times of crisis, that's even more critical. 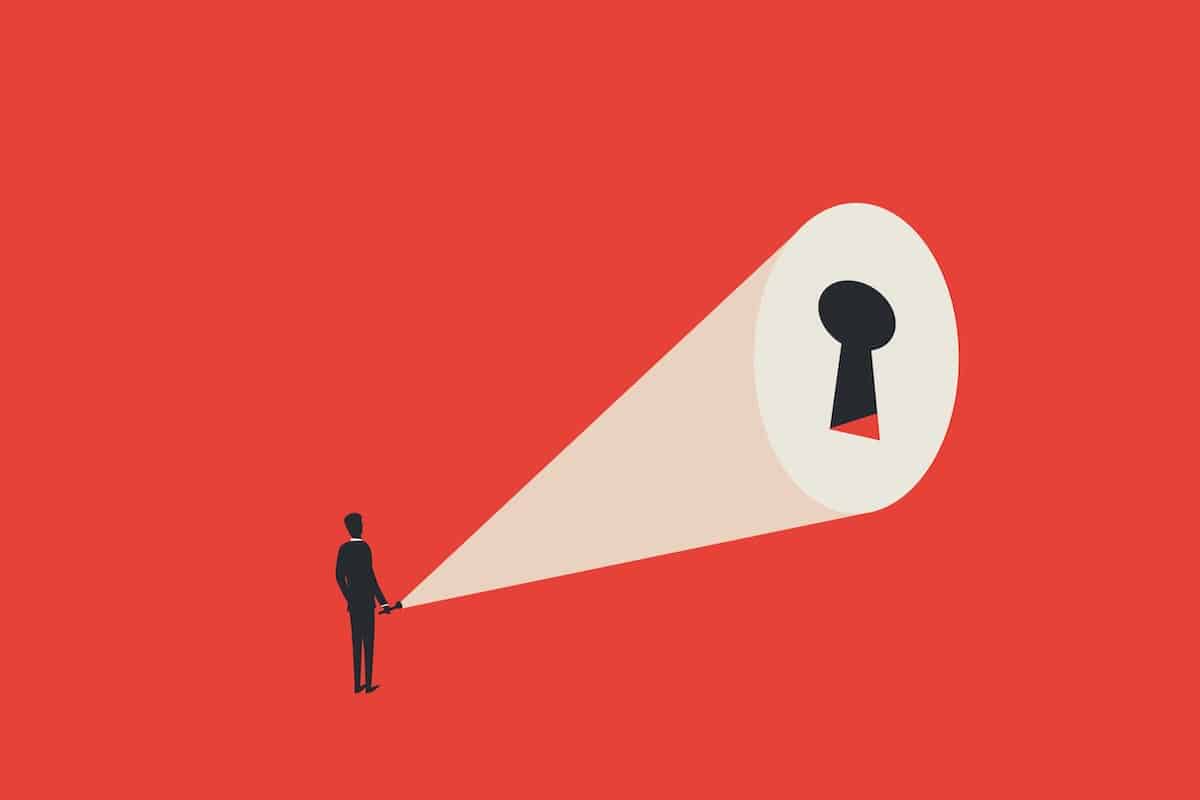 Who cares about company purpose when we have to survive?

Nothing reveals your culture like a crisis. True nature becomes visible in the decisions companies make under pressure – the greater the pressure, the more your company’s purpose is put to the test.

2020 will be the decade of culture-first organizations –that’s what Glassdoor predicted at the beginning of the year. Then came coronavirus. As people and businesses face the largest economic challenge of their lives, the need for survival forces leaders to make tough choices.

Should we stay true to who we are, or just focus on survival?

Even on a normal day, we are averse to uncertainty. However, dealing with the crisis shouldn’t come at the expense of long-term values. People will lower their expectations to keep their jobs, but they won’t forget how organizations treat them when things get back to the new normal.

Having a company purpose statement has almost become mandatory. However, most of the time, it’s just an inspirational phrase that means nothing. The purpose of an organization is defined by its actions, not its words. People want to be part of something bigger than themselves; they care about the impact.

Basecamp, the remote software company, made a strong statement a few weeks ago when they stood up against employee surveillance. Third-party developers were using their API to develop software to record and monitor people’s activities.

Its revised policy reads, “We’re about remote work within an environment of trust, not spying on your employees. It’s recently come to our attention that some third-party integrations go beyond traditional time tracking functionality to surveillance. We’re not okay with that, and we’re codifying that stance in this policy update.”

Basecamp prioritized doing the right thing over revenue. Starbucks did the same when it announced in March that, to encourage social distance, it would cancel seating in its cafes.

The Seattle coffee retailer models its value of, “acting with courage, challenging the status quo.” As Starbuck’s CEO explained, the company is adapting as new information is made available, making choices that feel right for its employees and customers, not just the business.

Apple and Patagonia closed their stores temporally to protect the health of both their employees and customers.

It’s hard to do the right thing when under pressure. A survey by the Society for Human Resource Management shows that 2 out of 3 employers say that maintaining employee morale during the pandemic has been a challenge.

On the bright side, many companies are finding strength by sticking to their purpose. As Tracy Keogh, CHRO at HP, said, “We always had a collaborative and supportive culture. We are engaging our employees more than ever.”

In times of crisis, always remember to do the right thing. Are your decisions true to your company’s purpose?

Organizational purpose serves as a backbone of stability, focus, and fortitude. Purpose helps people see the light at the end of the tunnel

People expect to be treated as human beings, not resources – especially in times of crisis. They expect their organizations to support them. Solidarity, not selfishness, is what leaders should provide, even if that means being realistic and candid.

Gravity’s CEO, Dan Price, had to choose between laying off 20% of his employees or going bankrupt. Rather than making the call on his own, he confronted his employees with the harsh truth and asked them for ideas. Together, they decided that each person would take a salary cut depending on their economic sacrifice. This collective, flexible response, helped the company adapt and avoid bankruptcy.

It was both surprising and encouraging to hear Unilever’s CEO reminding us, in the middle of a crisis, that purpose-driven companies are becoming more and more critical.

Alan Jope faces the same challenge as most of his counterparts. He’s under pressure to choose which stakeholder to prioritize. Unilever decided to take care of its employees first.

As Jope told Bloomberg, “You know, without showing authentic care for your employees, I don’t do anything as the CEO of this company. It’s our front-line people who are making the goods, who are serving our customers. So that, for me, is where it starts.”

Putting people first is more than an emotional reward; Unilever has benefited from increased agility and adaptability. The company has moved away from scenario planning by letting go of power and allowing employees close to the front line to exercise their judgment.

As Jope reflects, “We’ve discovered a new responsiveness in Unilever that I wish we had unlocked years ago, but it’s taken this crisis to do that.”

Several companies have stepped up to take care of their employees during these adverse times.

Columbia Sportswear reduced the salary of its chief executive to $10,000 a year. This unusual decision put employees, not senior executives, first. It allowed the company to continue paying its 3,500 U.S. employees who can’t work in its shuttered stores.

Several organizations, including Morgan Stanley, PayPal, Starbucks, and Bank of America, suspended layoffs until the end of the year.

This didn’t happen during the 2009 recession, as Jeffrey Pfeffer told The Washington Post. By reducing uncertainty and financial stress, people will be grateful, more loyal, and work harder, according to Stanford University’s professor.

In this global pandemic, the organizations that put people first will be rewarded in the long run. People will never forget how you treat them.

3.    A company purpose requires taking care of the community

It’s easy to be true to your purpose during normal times. Today’s crisis, which will reduce sales and profit, will put your organization’s beliefs to the test.  Do you exist just to make money, or to also create a positive impact in the world?

It’s comforting to see how many companies have stepped up and retooled their operations to take care of the community. Not because they had to, but because they wanted to.

Nordstrom, a luxury U.S. clothing department store, is the single largest employer of tailors in the U.S. When the face mask shortage became public, its alteration teams decided to take action – they are now on a mission to sew nearly 1 million masks.

Nordstrom believes its most important responsibility as a company is giving back to the diverse communities it serves. As Gigi Ganatra, VP of corporate affairs and public relations, explains, “While this is something that we do year-round, in times of emergency, this belief takes on an even bigger responsibility, and in this case, a global one.”  “

The masks will be distributed to frontline healthcare workers across two major hospital networks.

The Louis Vuitton Group, renowned maker of premium fragrances, converted some of the factories to produce hand sanitizer, being true to its purpose, (to be) “Engaged with society,” and living its values.

Household products company SC Johnson also converted a manufacturing facility to produce 75,000 units of hand sanitizer to be donated to those on the frontline of the epidemic.

The hospitality platform Airbnb, despite taking a huge business toll, has offered free housing to over 100,000 first responders and health care workers around the globe.

Purpose Is Good for Business, Too

For ages, we’ve been told that people seek meaning. Not surprisingly,

Simon Sinek’s “Finding Your Why”  is the third-most-watched TED Talk of all time.

In this global pandemic, the benefits of purpose have become more evident. Leading through purpose will not only help your employees and community, but also your business.

Purpose-oriented companies have higher productivity and growth rates. Research by Deloitte shows that purpose-driven organizations are 30 percent more innovative and their employees are 40 percent more loyal.

Build something lasting. Make decisions that count. You might feel the pressure all around you; the pandemic state of mind will tempt you to take the easiest path. As a leader, you can make a difference in the lives of others. Forget short-term thinking and focus on real impact.

Unilever’s Jope said it best: “Our company is guided by three deeply held beliefs: that brands with purpose grow, companies with purpose last, and people with purpose thrive. So we will not waver one iota in our commitment to purpose-led business.”

Doing the right thing is not only good for the community, but also for your business. Lead with humanity and purpose. Find your “why” and stick to it (especially during a crisis).

Do you want to learn how to create a company purpose?

Join our upcoming online program and acquire the tools and skills to create a purpose that will positively impact your people, community, and business. 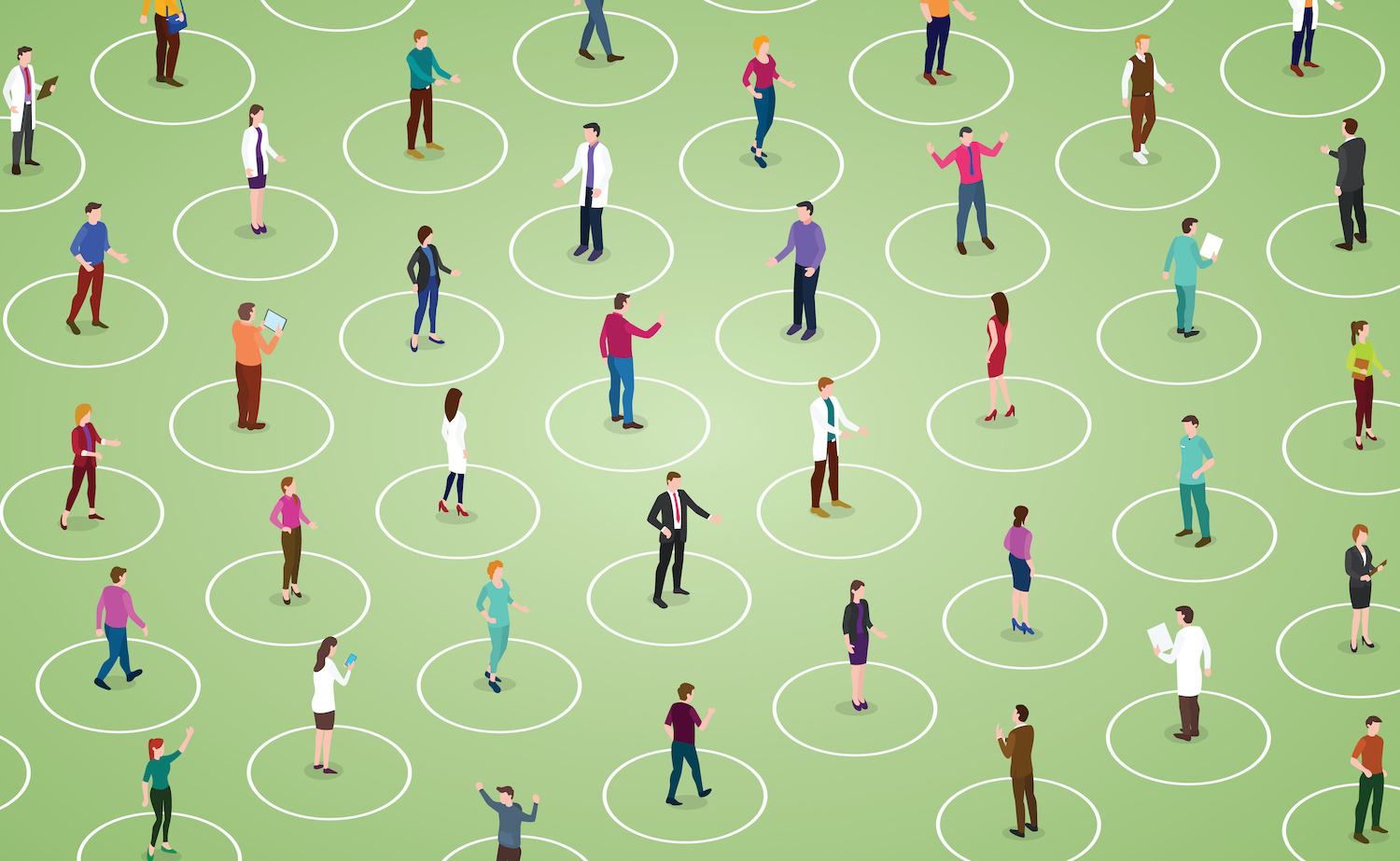 What I learned about Workplace Culture in 2020 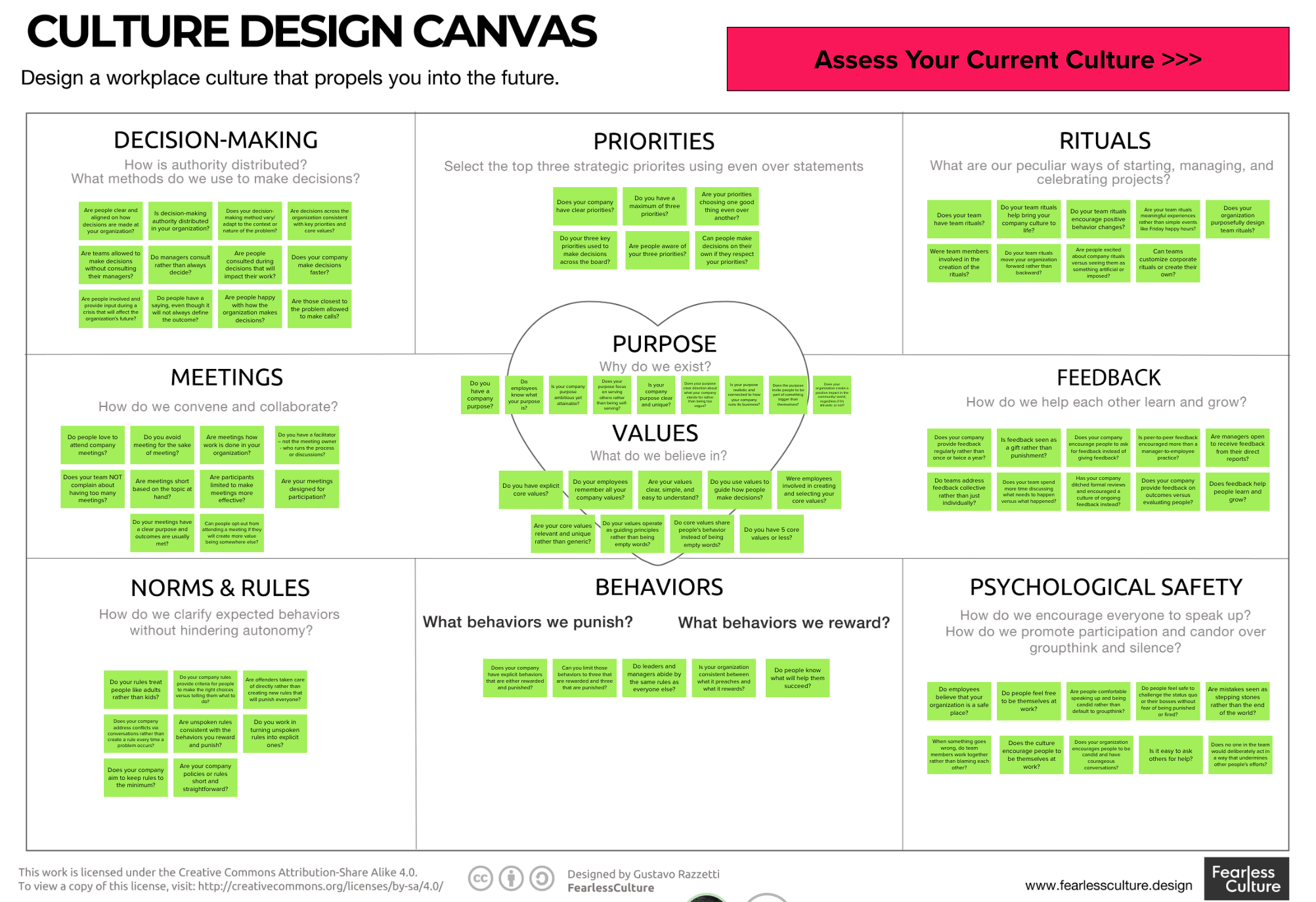 How to Assess Your Company Culture

Use this visual method to assess your current company culture. Map your workplace culture with the culture canvas, work on each block. 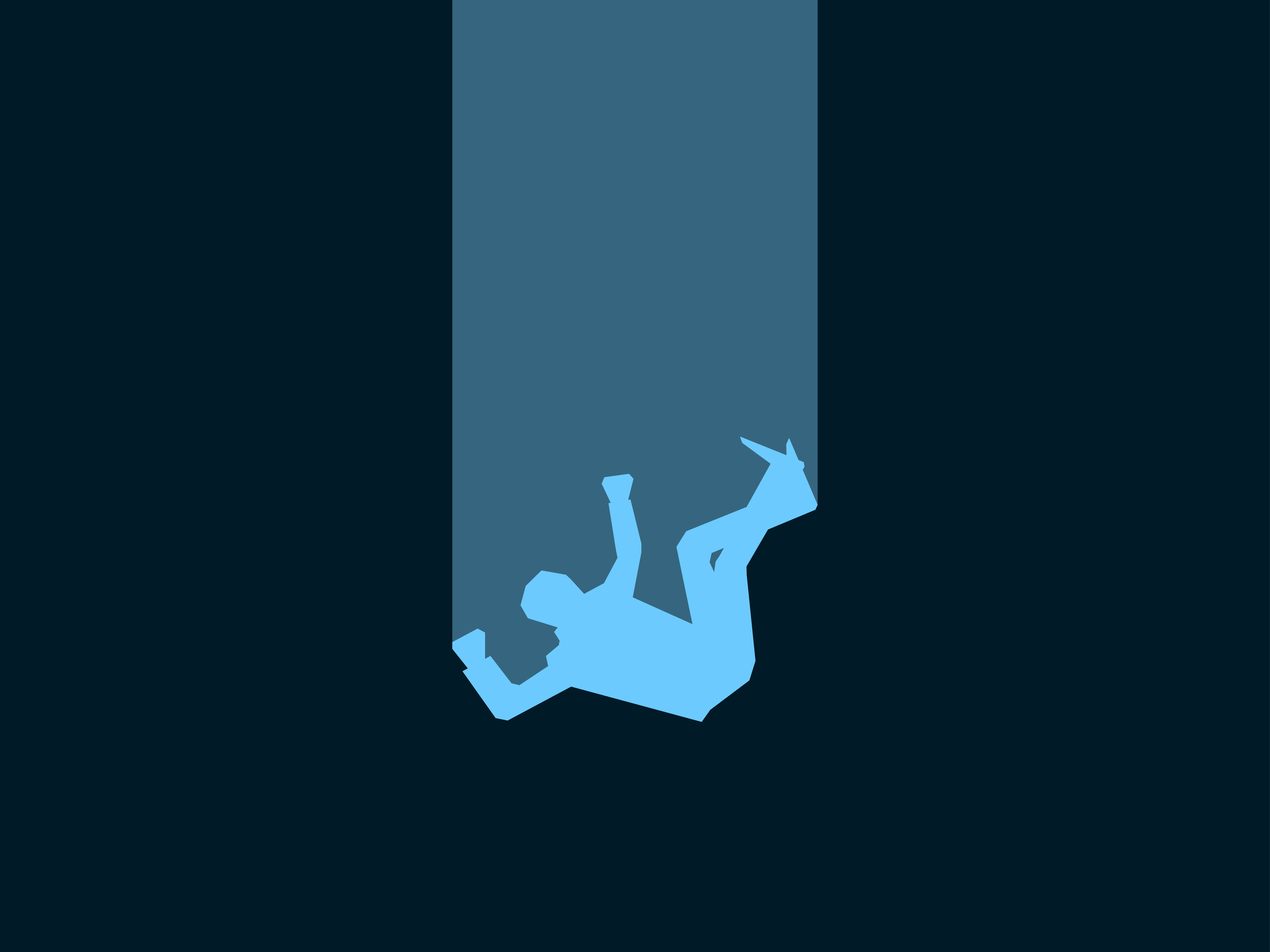 Leadership Immunity: Why Leaders Act as if Rules Don't Apply to Them

Leadership Immunity is the notion that powerful people believe that rules don't apply to them. Fight God Complex with intellectual immunity.