Safe to Try: The Best Decisions Are Never Perfect

How to get teams unstuck by using safe to try decisions. 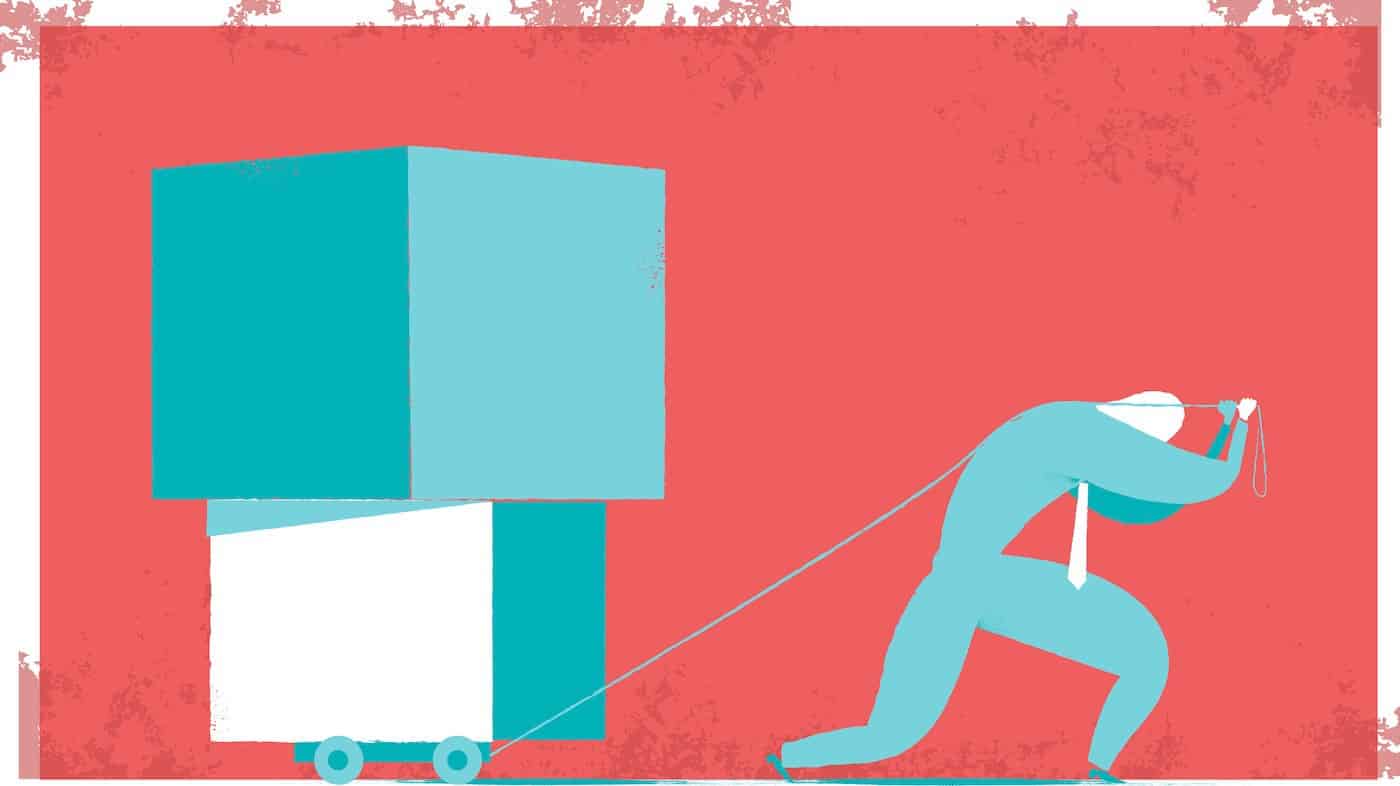 Making decisions is like freedom. Everybody wants it, but they don’t know what to do once they get it. In most organizations, making decisions equals to having power. And that’s why people want to make the call. However, when they are tasked to make a decision, most people freeze and do nothing. They get stuck trying to find the perfect decision rather than one that it is safe to try.

“In business, if you realize you’ve made a bad decision, you change it.”— Richard Branson

You don’t need a title or someone else’s support to make things happen. You need clarity to make the call. And the courage to pull the trigger when the rest are afraid of failing.

However, when coaching teams, I usually observe how fear takes over excitement. Those who wish they could make the call, don’t want to be exposed.

Why Managers Fail to Make Decisions

"You can’t make decisions based on fear and the possibility of what might happen.” – Michelle Obama

Some executives are excellent strategists; others are great executors. Very few play well at the intersection between planning and acting: making decisions. Here’s why.

Neuroscientist Antonio Damasio discovered that people with damage in the part of the brain where emotions are generated, couldn’t make simple decisions.

Shall I have chicken or turkey? With no connection to their feelings, these test subjects weren’t able to decide something simple like what to eat.

Your gut and heart are as important as your brain; listen to all your ‘brains’ when making a decision.

Most managers delegate tasks, but they don’t distribute the needed authority. They tell their teams: “you are in charge now,” but don’t let go of the final approval. Their inability to ‘share’ power is driven by lack of confidence, not lack of leadership training as many HR folks think.

Delegating authority is an act of generosity.

Executives don’t delegate ‘power’ because they are more concerned about their own reputation or pride than doing what’s right for the organization.

Once you make a choice, you are saying ‘yes’ to the consequences too.

With so much information available, we can prove any theory right or wrong. Information overload can drive confusion rather than clarity. In most of the cases, an excess of analysis can become a distraction to put off making a decision.

Decisions can have unexpected consequences. That’s why most managers fall prey to indecision: they are afraid of failing. Being fearful of risking their reputation makes them deaf.

When you listen to your fears, you stop listening to your gut and common sense.

Fear is anticipating a future that we are not sure will happen.

Get Unstuck: Make it Safe to Try

“If you obsess over whether you are making the right decision, you are basically assuming that the universe will reward you for one thing and punish you for another.”— Deepak Chopra

The perfect time to make decisions is now. Taking time to reflect and clarify your thoughts is good. You shouldn’t rush making decisions. But if letting something stew becomes a never-ending process, then you are not reflecting but procrastinating.

Perfectionism is the worst enemy of change. Some teams spend meeting after meeting discussing their issues rather than solving them. Overthinking is avoidance.

Most decisions are not perfect. But they drive action, unlike indecision.

“So. Tell me. What do you think? Which is better? To take action and perhaps make a fatal mistake — or to take no action and die slowly anyway?”― Ahdaf Soueif

Take the plunge. That’s the first step. You can always course correct. Action drives excitement. And it’s much better than watching other teams create stuff while yours continues to rehash possible outcomes.

What Are Safe to Try Decisions?

The most successful teams are those that can adapt to a changing environment. That requires to shift your team's mindset: from "limiting" to "liberating."

The best way to minimize risk is to make decisions in small doses–you can pivot or scale based on actual results.

“Safe-to-try” decisions drive the action rather than waiting for the perfect solution to arrive. Their purpose is to choose a path and then course-correct based on real feedback rather than getting stuck by a hypothesis based on fear and anticipation.

Think of it as a Litmus test. To accept or reject a proposal, there are two questions you should consider:

“Will this decision move the team backward?”

“Will the proposal, if implemented, cause harm that can not be mitigated promptly?”

The purpose of these questions is not just to validate the proposal, but to avoid personal bias and speculation. Do you have any objection (not opinions)?

Objections need to be based on facts and information in the present, not future tensions.

If no real objections are presented, the proposal is considered ‘safe-to-try,’ and the team can implement it.

Safe-to-try decisions are built on the following principles:

When teams get stuck and can’t pull the trigger, I always ask: What’s the worst thing that can happen?

In most cases, the answers are not strong enough to stop the team from trying something new. Most objections are not that solid, once you start probing them.

Many times people rationalize their emotions to hide their fears. That’s what excuses do.

I prefer someone, to be honest, and say that they are afraid of taking risks than to create complicated rational justifications. Excuses are distractions, not real objections.

Stop waiting for the perfect decision. Embrace an experimental mindset. Think of your choices as prototypes that you can improve as you learn more about the problem. Safe to try decisions help us adjust our course by action, rather than getting stuck by inaction.

“All the time the wind is blowing. Where it’s blowing next, we don’t know…”— Anthony Philips

Realizing that they cannot anticipate the future is hard for most executives. They were trained and wired to pretend they know everything, to be in control. But, more often than not, things take a life of their own.

Failing is a possibility; fear of failing is not.

The magic of the ‘safe-to-try’ method is demystifying decision-making. However, commitment still plays a significant role. There’s no room for fears or second thoughts—even ‘small-dose decisions’ need to be treated seriously.

The outcome of most decisions relies more on the support and conviction behind it than on the decision itself.

There’s no such thing as the perfect time or choice.

The best decision is the one you make with determination. Not the one you keep putting off because it’s not perfect. 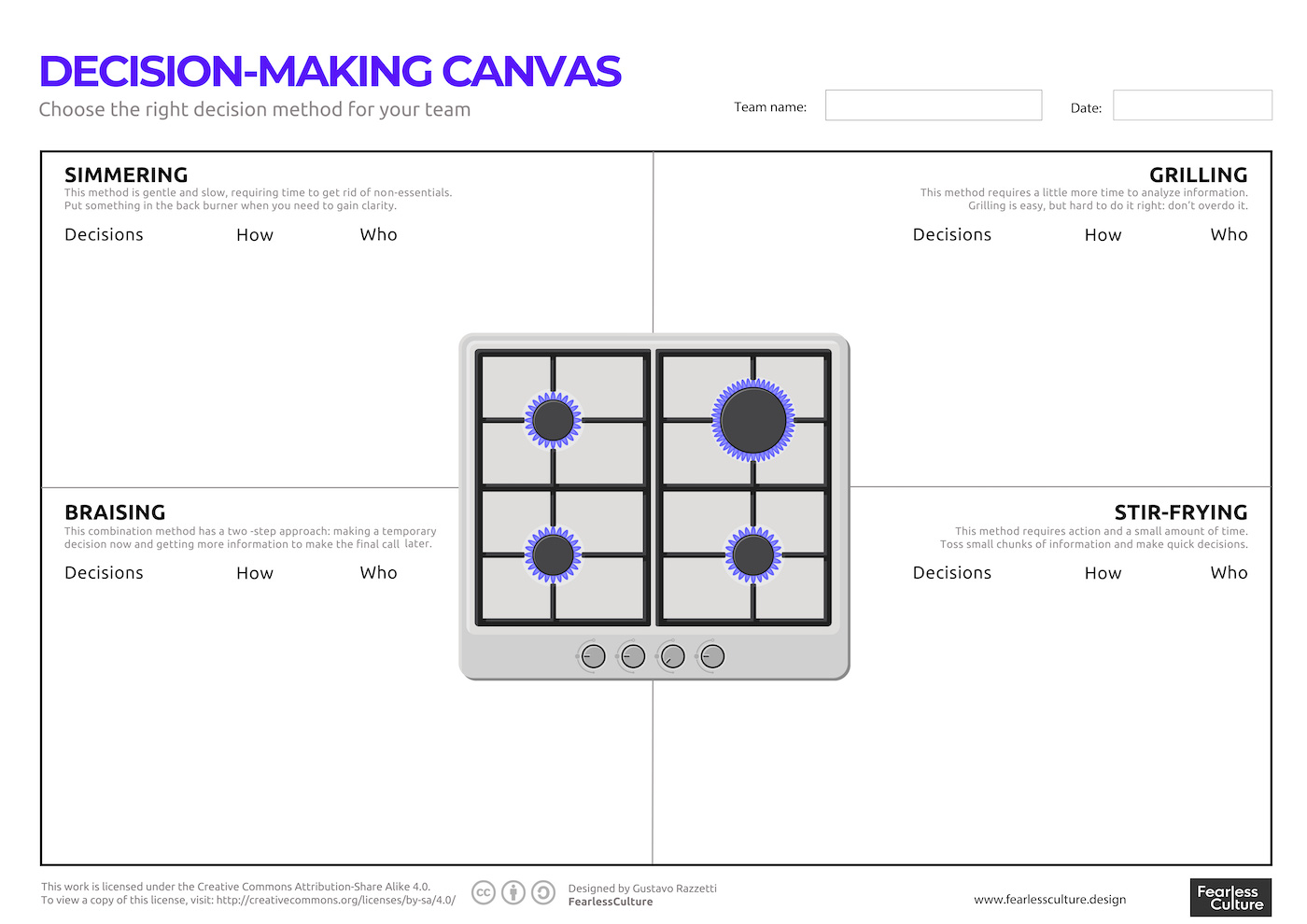 The Decision Making Canvas: How to Choose the Right Method to Make Decisions 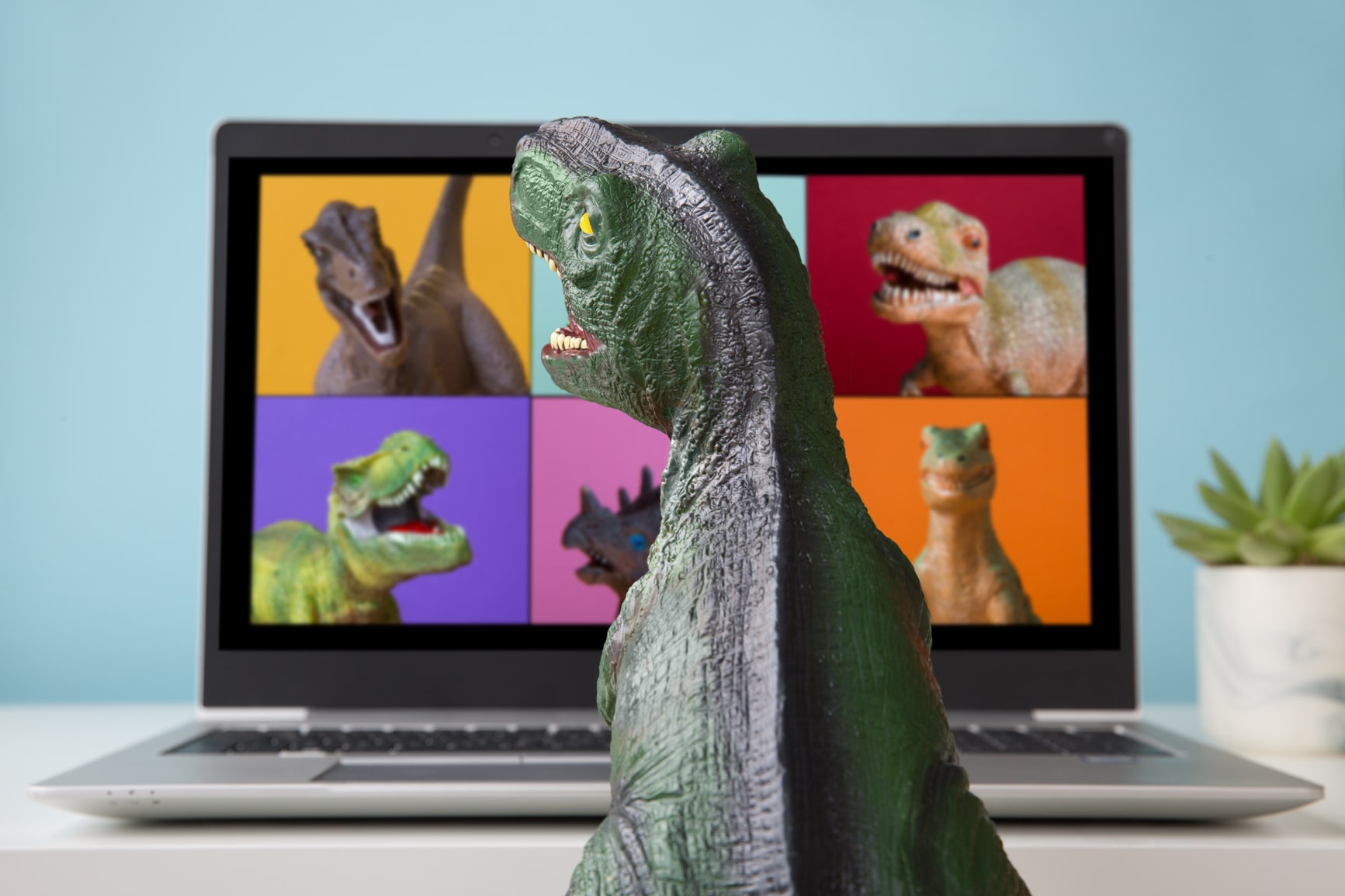 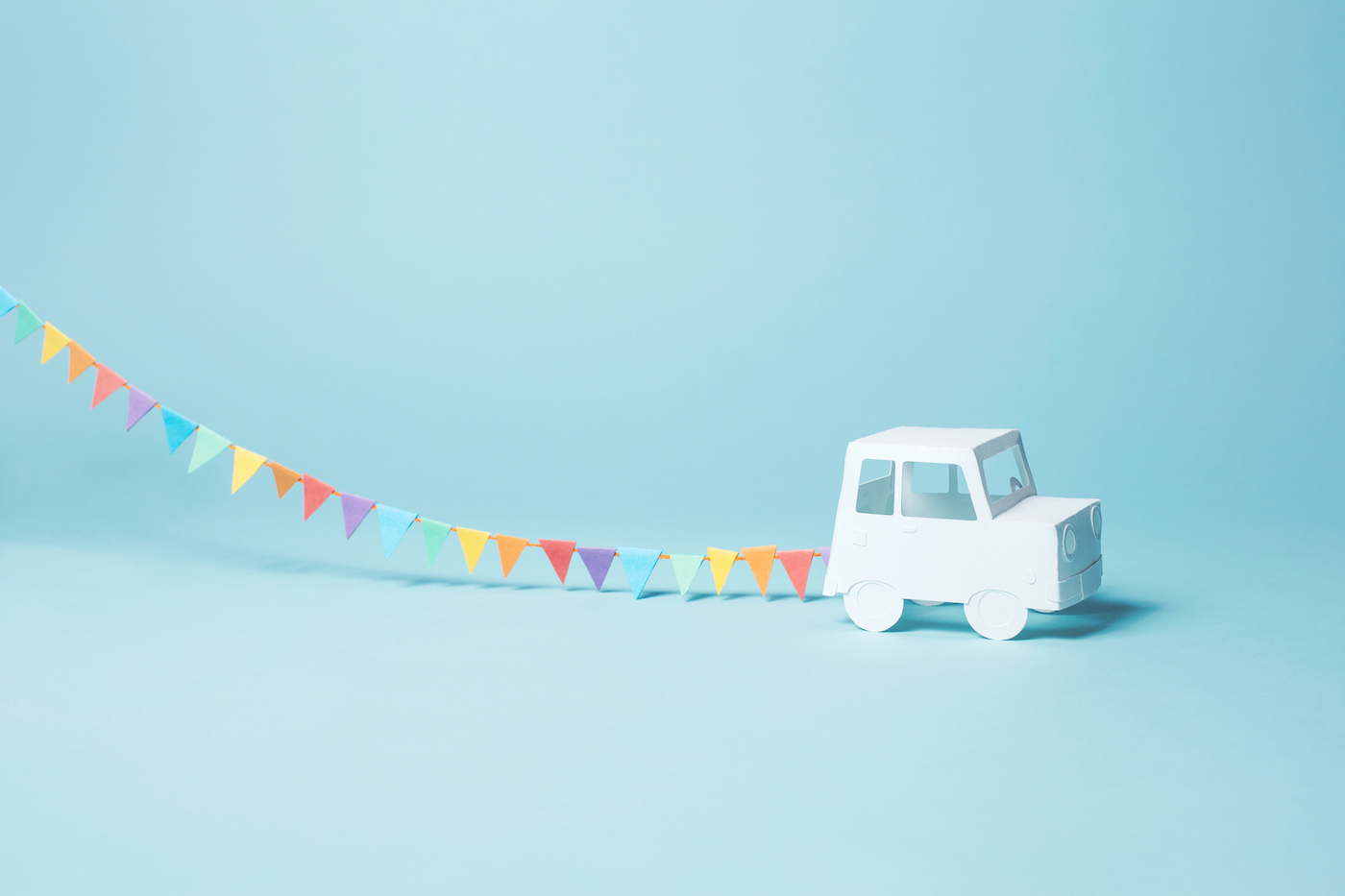 How to Build a Culture Where Anyone Is Welcome