Team rituals are a powerful way to bring people together. They create emotional connections and intentionally shape your culture. 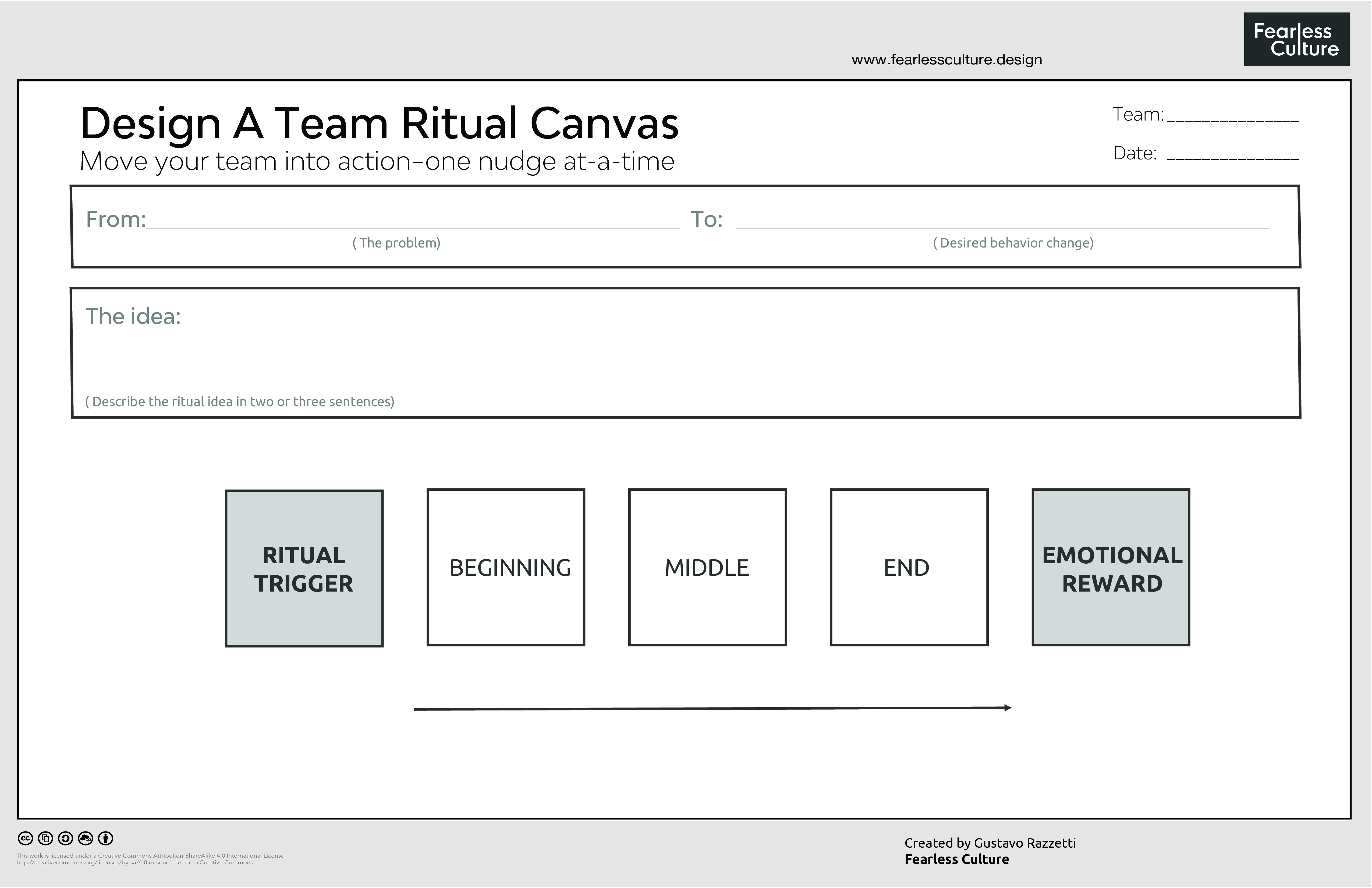 Use The Team Rituals Canvas to Intentionally Design Your Culture.

Workplace behaviors can happen by accident or by design.

Team Rituals are a repeated enactment of a particular set of behaviors, scripts, and interactions — they wire people’s brain for success. Workplace rituals have the special power of bringing people together; they give us a sense of purpose, values, and meaning.

Ritual design is a powerful way to purposefully generate change. It’s about creating small, symbolic acts that will encourage the behaviors which an organization rewards. The Design Team Ritual Canvas is a simple, powerful tool to intentionally craft your workplace culture.

What Is Team Ritual Design?

Identify a problem or tension that’s slowing your team down and design a ritual to fix it.

The team design ritual exercise helps to develop a problem-solving mindset. Rather than expecting others to solve conflicts, it helps teams to take ownership and jump into action.

The ritual design process can be applied to both simple and complex problems. It develops a sense of curiosity, making people more aware of team tensions, and how they can be solved.

Download Your Free Copy of the Design A Team Ritual Canvas

The Difference between Team Rituals and Events

1. Rituals require a trigger to get started

It can be a regular event (at the beginning of our status meeting), a date (every Monday at 8:00 am), or driven by an external event (every time it rains, or we win a new client, or someone joins the team).

2. Rituals have a clear flow: beginning, middle and end

The beginning is what happens after the trigger (someone rings a bell and the team gets together), the middle is the most important piece (a human tunnel is formed and new hires have to go through), the end is the culmination and it's usually a celebration (taking a picture, toasting with the new employees, ask them to share how they feel).

Once the ritual is finished, how do we want people to feel? Ritual transform people's behavior by tapping into their emotions.

4. Rituals occur with a particular frequency

What makes rituals unique and relevant is repetition – they help change behavior one nudge at a time. Rituals can happen everyday, once a week, or every other month depending on the trigger.

Rituals help transform behavior – they move the team from a state (nothing feels good enough to celebrate) to an improved one (start celebrating small wins). Unlike, routines or habits, rituals have a deeper meaning because they are done more consciously and require more effort than the other two.

Exercise: How to Design Workplace Rituals

Do you want the team to be more candid when providing feedback? Do you want to regain momentum and pride? Does your team suffer from analysis-paralysis? Are egos or titles getting in the way?

There are many ways to identify the initial problem. One simple way is to ask each participant to list 5 issues, then everyone can vote. Agree on the criteria that they will use to vote. It can either be the most pervasive issues, the ones that – if fixed – can create an immediate impact, or the things that are hurting the team the most.

The Cultural Tensions Canvas is the perfect tool to uncover the emotions, mindsets, and behaviors that are getting in the way of performance. It will help you identify and prioritize key cultural tensions that can be solved by creating a specific team ritual.

Example: I worked with an insurance company that was suffering from perfectionism — the CEO set the bar too high and never celebrated any wins. The team was frustrated and losing self-confidence. Nothing was ever good enough.

2. Reframe the tension into a challenge

Use the “How might we…?” format to turn the tension into a challenge.

First, focus on understanding the tension. Ask the team to share everything that people do, say, and think when this tension arises.

How and when does the issue manifest?

What words do people use to refer to this problem? Does any particular condition or person amplify this symptom?

How do people react? What behaviors do you observe?

How does it affect your mindset and behaviors?

Use the findings to uncover some insights. Reframe the problem into a how might we question.

Example: We asked, “How might we design a ritual to start celebrating small victories?”

Facilitate a brainstorm to find a prescription for the problem. Run three or four ideation rounds with different prompts, like the following:

What if the ritual happens outside of the office?

Turn something uncool we already do into an exciting experience.

Come up with ideas that are analog (no tech needed).

Think of an idea that could get the team fired.

Once the brainstorm is finished, select one idea the team wants to test/ implement.

Example: After discussing various ideas, the team selected one: the Gong ritual. Any member of the Executive Team could strike the gong to invite people to celebrate a new win or team achievement.

4. Use the Design a Team Ritual Canvas to Craft the Narrative

Use the following template to design the ritual experience. The trigger is a behavior or event that will kick-off the ritual and the reward is mostly emotional – it’s how you want people to feel at the end of the ritual.

All rituals have three parts: beginning, middle, and end. Consider those three key moments when designing one.

What triggers the ritual? A new victory (a new client, revenue growth, etc.)

Beginning: Someone strikes the gong three times. The sound creates an alert. Everyone stops working and gathers around the gong.

Middle: A senior executive announces the win and celebrates the team who made the victory possible.

End: Everyone toasts, celebrates together, and someone takes a picture of the team that brought the victory home. The snapshot is then posted in the “gong wall of fame.”

Reward: A sense of collective accomplishment. People feel motivated to create new victories and look forward to the next celebration. The ritual builds momentum.

Rituals are not meant to be perfect. However, you never know how people will react until you put them into practice. The best way to test a ritual is to implement it – use a low-res version (prototype) and start with a small team before you scale it to the larger organization.

The team has established that the gong will be used on Fridays to celebrate all the week’s accomplishments.

Some teams have decided to implement their own version to celebrate smaller, everyday accomplishments. Rituals become more powerful when people tweak them and adapt them to their needs — the sense of ownership increases engagement.

Designing a ritual requires practice. Some teams crack the code immediately; most tend to come up with processes, instead of rituals, or with over-complicated ideas. Be patient.

Make sure people don’t confuse a ritual with routines or habits. They’re similar, but not the same (read more about the differences here).

Habits are something that we do without thinking. Rituals, on the contrary, involve our full attention and emotions — they turn ordinary tasks into something meaningful.

How to Design Team Rituals to Accelerate Change‍ 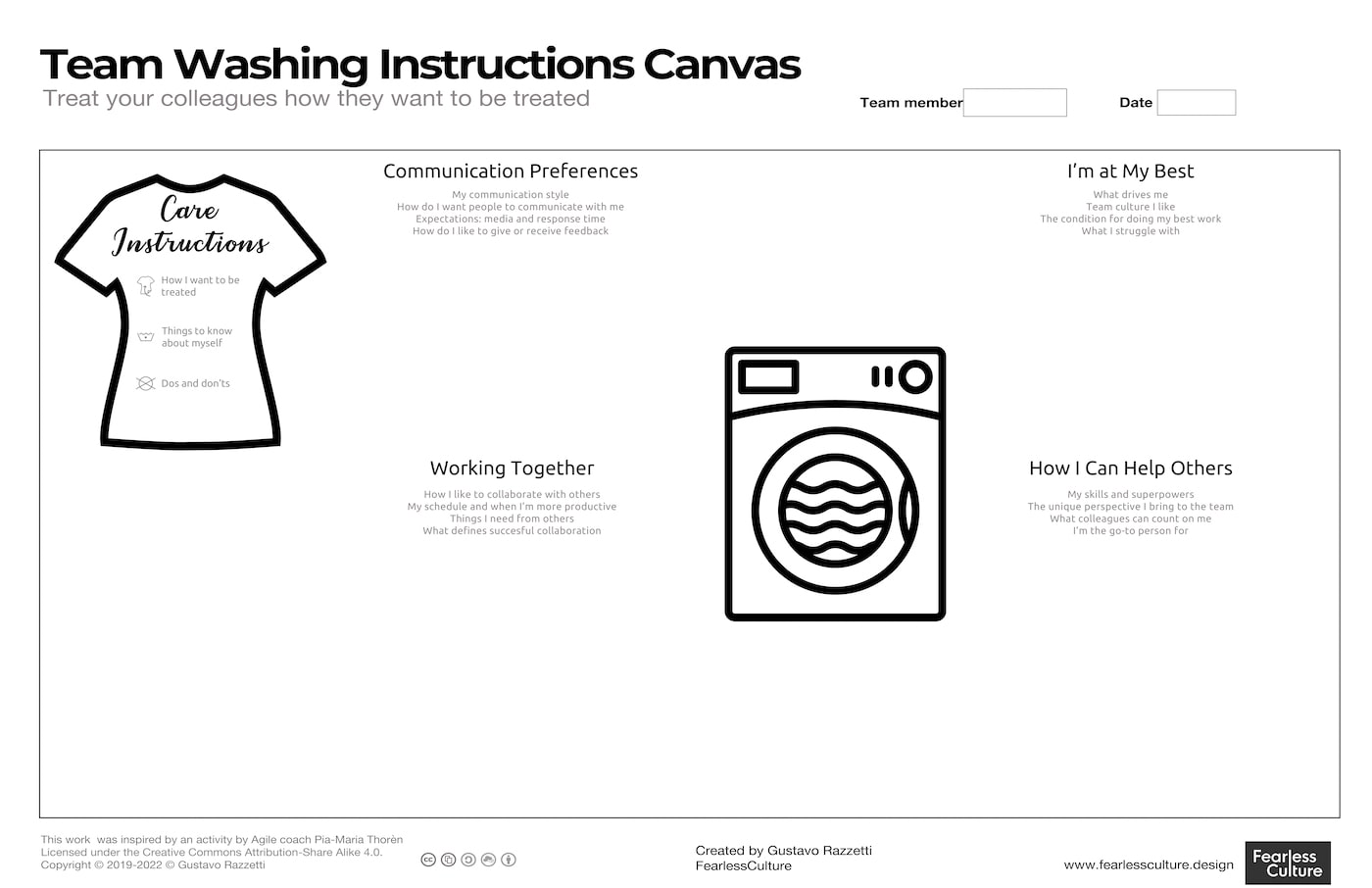 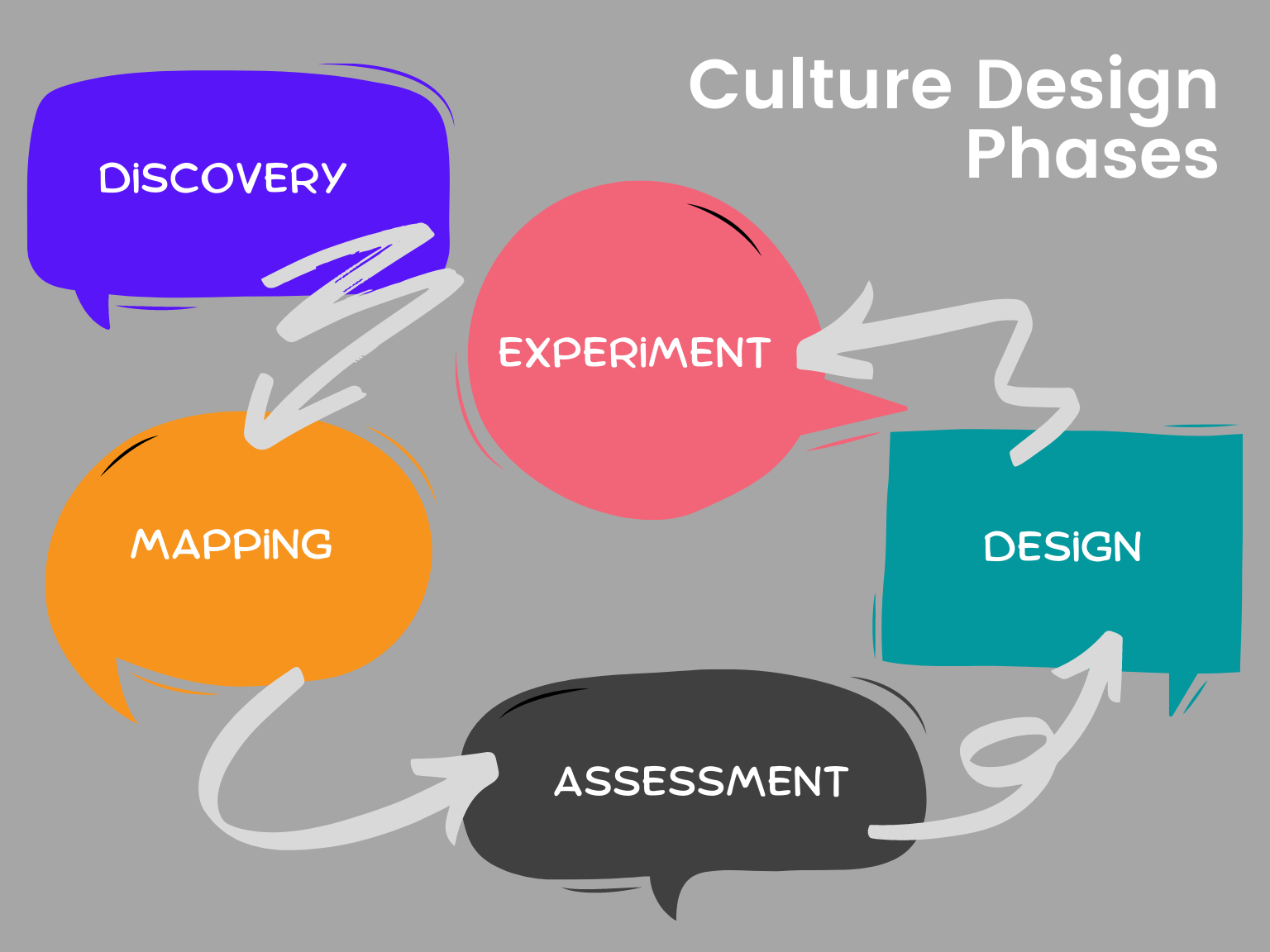 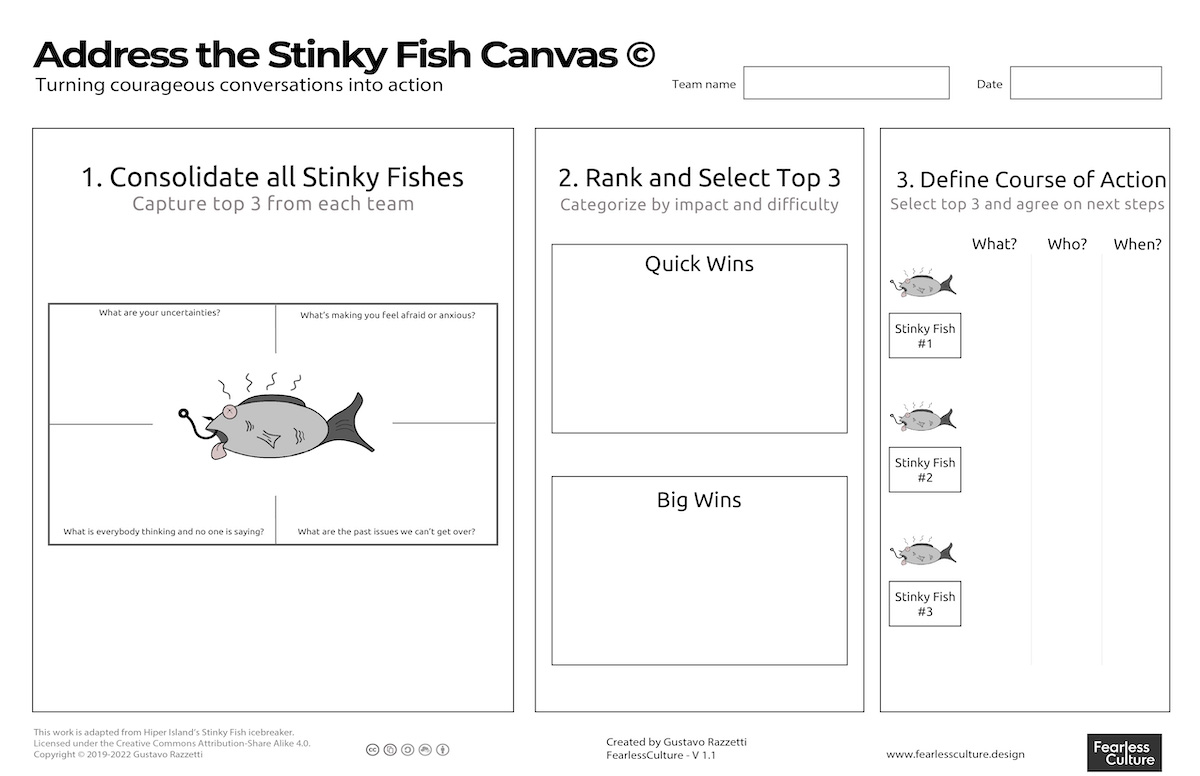