Consent is faster than consensus because it does not require alignment of preferences but rather an alignment of what’s acceptable. 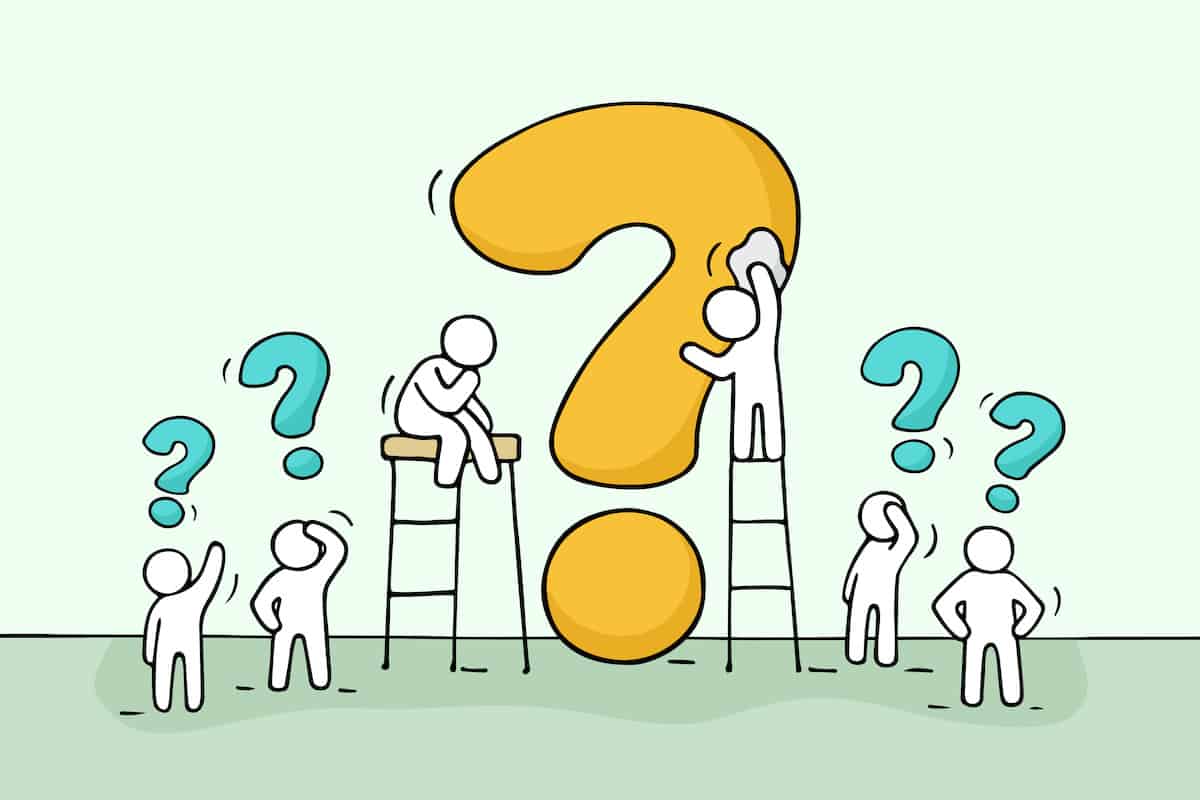 Making perfect decisions is impossible, especially in times of unprecedented change. Smart organizations realize that a single leader can’t have all the answers – they need to tap into the collective wisdom to find what’s best for the company. However, building consensus takes a long time and usually ends up with mediocre solutions.

So, how can you drive your team to support a decision – even if they disagree?

Move from consensus to consent – rather than aiming for everyone to agree, make sure no one objects to the decision.

The Differences Between Consensus and Consent

Most people usually consider decision-making with a binary approach: consensus or autocratic. The first is about making sure everyone agrees; the latter is about one person having the power to impose a decision on everyone else.

Consent is meant to break this black and white approach by providing participation, just like consensus does with the autocratic method’s speed.

Amazon uses the phrase “disagree and commit” to capture the spirit of consent – rather than looking for 100% of people to agree on a decision, make sure that no one will say no, or fight it.

Consensus means that everyone agrees on the decision; consent means that people agree to move forward, even if they don’t necessarily like the solution.

Consent considers people’s range of tolerance – will they accept and support a decision, even if it’s not their preferred choice? Simply put, people might not love the decision, but they can live with it.

Though this practice is still new in the corporate world, organizations have been using it centuries.

The Zulu people in South Africa have been practicing it for ages. Buurtzorg, a home-care organization in The Netherlands with 14,000 employees, has been using consent for almost two decades. In 2015, the Paris Agreement on Climate Change used this integrative decision-making method to reach an agreement that none of the 195 countries would oppose.

Consent is a variation of the advice process. To understand how to apply, it’s worth first exploring the context.

The Advice Process in Practice

This method comes in many shapes and forms, but the essence is the same. The Advice Process, a term coined by Dennis Bakke from AES Corporation, states that any person can make a decision after seeking advice from:

At Netflix, Informed Captains are assigned to lead large projects and have complete authority to make decisions. However, they must get advice from others. They have an obligation to ask for advice from those affected by the decision – to digest different perspectives, not to follow their recommendations.

Dennis Bakke came up with the advice process for the age-old organizational dilemma of embracing the rights and wants of the individual, while simultaneously ensuring the successful functioning of the team or organization.

In his own words, “Most senior executives seem to believe God or the board created them to make all the important decisions. But every decision made at headquarters takes away responsibility from people … It reduces the number of people who feel they are making an effective contribution to the organization.”

The advice process played a crucial role in helping Bakke turn AES into a global energy supplier. The key steps are:

The initiator is usually the person who sees the problem, initiates the idea, or works in the most affected area. The initiator seeks advice from subject matter experts or those who will suffer the consequences. The biggest issue, the more people need to be included in the advice process.

The advice process is faster than the consensus method, but it still takes time. However, it also produces better outcomes.

Advice is just advice. No one, regardless of title or role, can tell a decision-maker what to do. When asking for advice, clarify expectations.

Are you just looking for input or do people have a say in the final decision? Are you trying to understand the different perspectives, or simply realize how people will be impacted? Are you looking to validate an idea, or do you need people to help you craft one?

Clarifying roles and expectations will avoid confusion. Most of the time, people complain that they are consulted and then their advice is not followed. The advice process integrates people’s thoughts, but is not looking for consensus.

Consent-based decision making is a variation of the advice process. It states that a decision can be made as long as no team member has an objective, substantial objection.

You are not looking to determine whether people love the decision or not, but if they can live with it.

If one person raises a conscientious objection, the decision can be blocked. However, the process allows the proposer to adjust the proposal to address any particular objection and unblock it.

Giving consent means that the team agrees that, if approved, the proposal will neither harm the team nor bring it backward.

Objections should be considered valid only if they pass a test – that’s where the facilitator plays a vital role during the process. A colleague cannot block a proposal simply because they have a better one or because they don’t love it. Objections must be based on the present (not on potential future scenarios), objective, and not based on personal tastes.

This method is more structured than the Advice Process. It takes some time for teams to get used to it. Initially, people resist the structure –sometimes rigidity – but with practice, it quickly turns into a quick, effective, and collaborative decision-making method.

The following chart summarizes the step-by-step process, clarifying the different roles along the process.

Anyone can start the process by describing a problem and proposing a solution. The facilitator guides the team throughout the conversation without taking sides.

The key lies in the proposal itself. A clear, well-crafted proposal makes the process easier – it’s essential that the proposer spends some time on this. Always start your proposal with “I propose we…”

Once the proposal has been shared, anyone can ask questions. We call them “clarifying” because it helps to understand the proposal and see if the team needs more details.

The purpose is not to challenge or try to improve the idea, but to understand what the proposer wants to implement.

Every colleague can ask questions in any order. The proposer will answer one by one and, if there are unknowns, it’s okay to respond with “not specified/ I don’t know at this point.” Anyone can ask as many questions as needed.

The facilitator must avoid back and forth discussions. Every question should be answered before jumping into the next one. Questions are not meant to express one’s opinions, but to help clarify what the proposal is all about.

No reactions (comments, feedback, likes/ dislikes, etc.) are allowed during this round.

One-by-one, each member can share their reactions to the proposal. The facilitator manages the order and makes sure all reactions are captured. There’s no room for discussion or responses.

During this round, the proposer just listens. The rest of the colleagues are allowed to speak freely, share their perspectives, and even suggest improvements or recommendations.

The facilitator should encourage people to be constructive.

The proposer can choose to amend and clarify the proposal based on people’s questions and reactions. There’s no need to change everything unless the proposer thinks so. The integrative decision-making process is about participation, not consensus.

The proposer shares the revised version. If no changes were made, they simply state that the proposal stays as initially crafted.

The facilitator invites objections by asking colleagues, one at a time, “Do you see any reasons why adopting this proposal would cause harm or move us backward?”

Best case scenario, no objections surface and the proposal is adopted.

Objections are stated, tested, and captured without discussion. To move forward, all objections must be unblocked. The facilitator can push back to ensure objections are valid (objective, based on present tensions/ facts, and not driven by personal preferences).

The goal of the final round is to arrive at a proposal free of objections. The proposer must adjust the idea to solve the different objections. Each might be addressed and integrated, one at a time.

Once all objections are integrated into a new proposal, another objection round is needed. This process continues until a solution is adopted or the proposer decides to withdraw the proposal – either to improve it and bring it back later, or to dismiss it altogether.

Download the free Mural template which includes those steps and also allows you to capture the different conversations (questions, comments, objections, the revised proposal, etc.).

The Benefits of Consent Decision-Making

Consent is faster than consensus because it does not require alignment of preferences, but rather an alignment of what’s acceptable. It focuses on making progress over perfection.

Object with facts, not opinions. Consent forces people to think more objectively about making decisions rather than centering on what they like.

The integrative decision-making process separates questions from reactions. This creates two different moments: one for understanding and another for reacting. People usually judge things before actually comprehending what they are reacting to.

Consent quickly becomes a verb that promotes action over analysis paralysis. “Do you consent?” is a powerful question that reminds people both that their opinion matters, but also that they always need to commit (even if they disagree).

Finally, this process helps build a constructive mindset. Rather than fighting against each other or pushing back for the sake of it, colleagues adopt a problem-solving mentality. They understand the tension that’s driving the proposal and become part of the solution.

Even the most skeptical and challenging players end up jumping onboard. At some point, everyone realizes that they could play the role of the proposer, too. No one wants to be in the hot seat with the precedent of having blocked everyone else’s proposals.

Do you need help improving how your team makes decisions? Reach out and let’s discuss how we can help you. 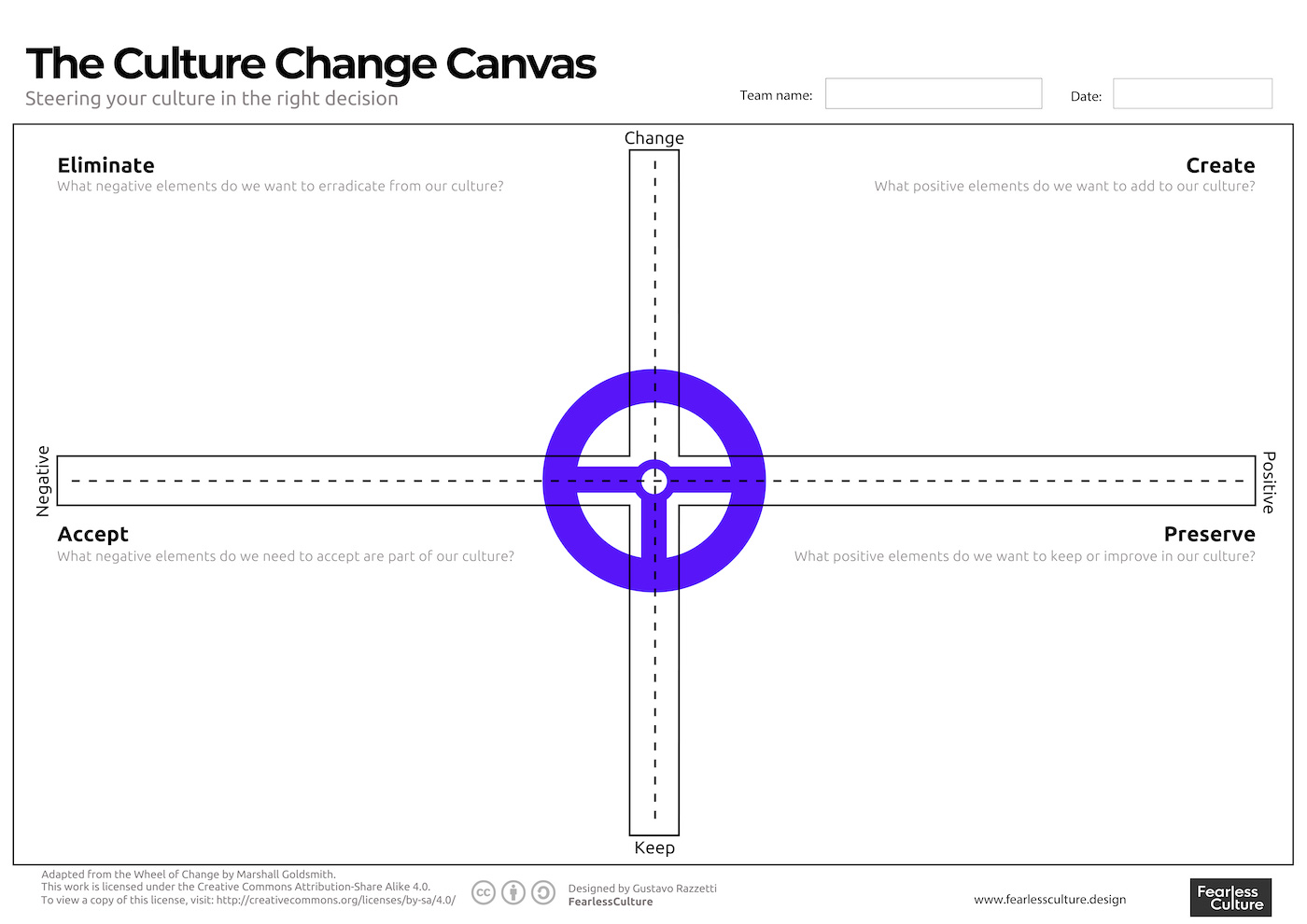 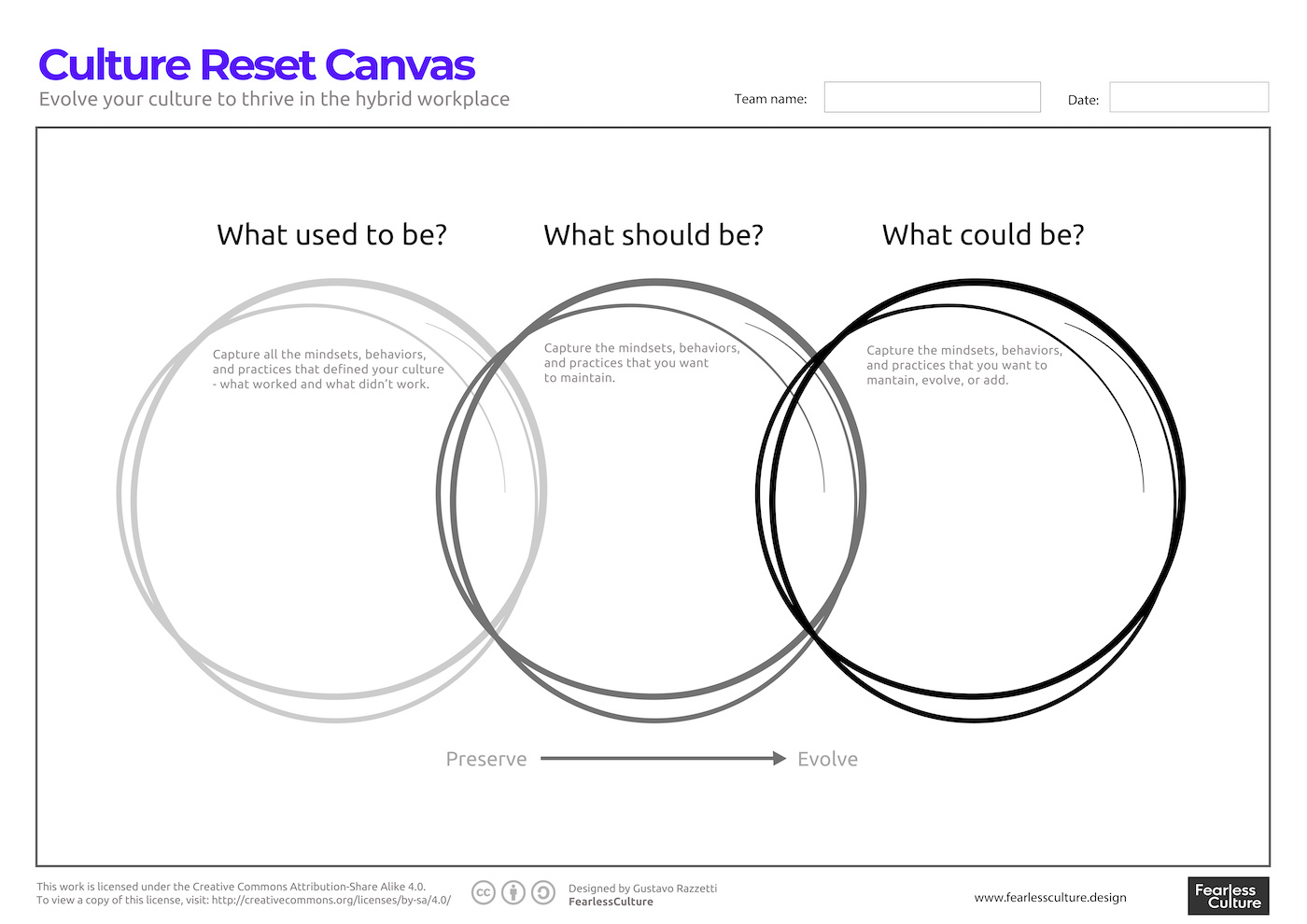 How to Reset and Evolve Your Company Culture – Exercise 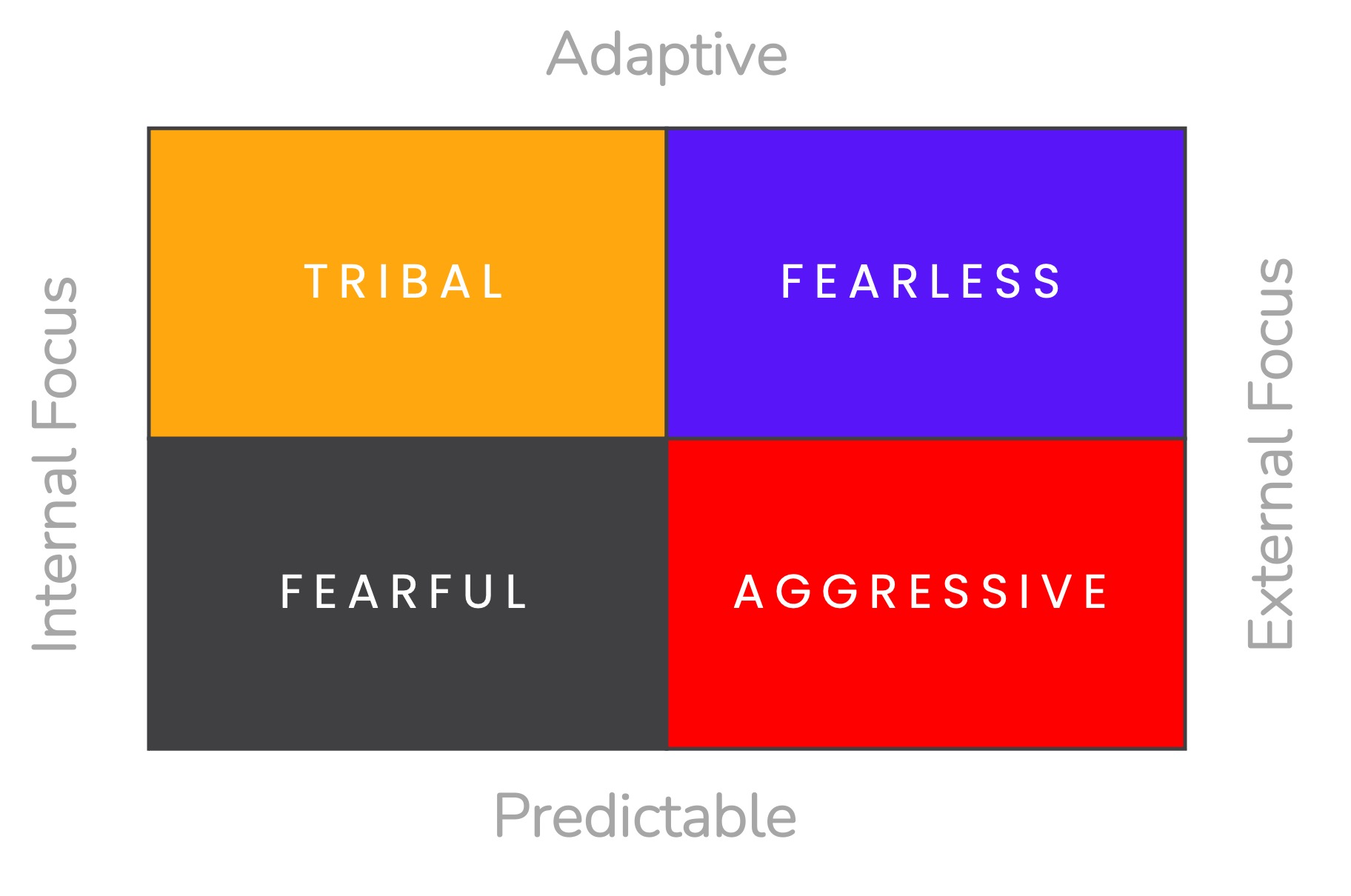 There Are Four Types of Company Culture – Which one is yours?